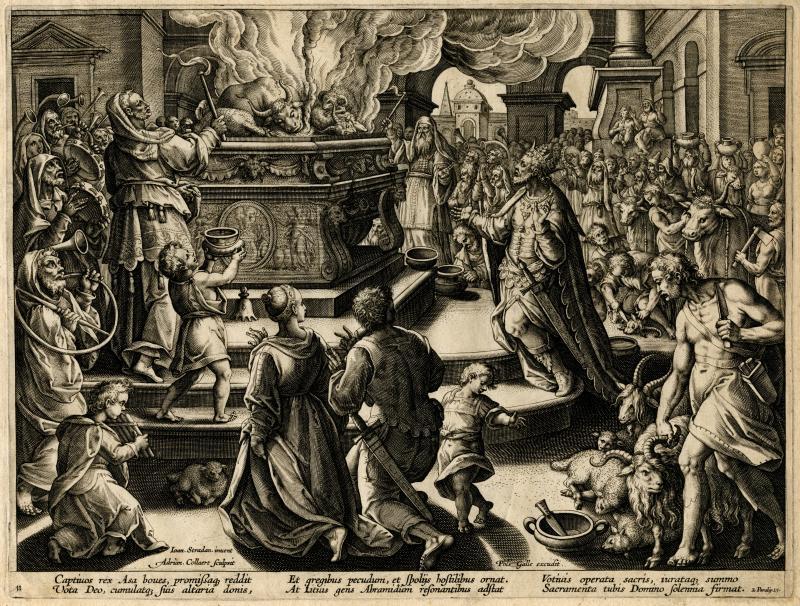 Around 1560, Adriaen Collaert was born into a family of reproductive engravers in Antwerp, Belgium. Likely trained by his father, Hans Collaert I (Flemish, c. 1530-1581), a prominent draftsman and engraver, Adriaen, focused his work on print publishing, book illustrating, and reproductive engraving. Throughout the 1580s, he worked for several print publishers, including Philips Galle (Flemish, 1537-1612) whose daughter, Jozijne, Adriaen married in 1586. By the end of the 1580s, Collaert began working on book illustrations, and he established a successful workshop in the early 1590s. His activity in publishing and book illustration grew throughout his career, and by the 1600s, he was receiving  many commissions from leaders of the Roman Catholic Church, who supported the Counter-Reformation, also known as the Catholic Revival.

The engraving, The People of Judah Rejoicing over the Oath to the Lord is a copy of a pen, brown ink and wash, heightened with white drawing by Johannes Stradanus (Flemish, 1523-1605), from his 1589-1590 series, Encomium Musices (The Eulogy of Music). The series, published by Philips Galle, included sixteen plates illustrating various biblical stories, where music played a prominent role. Galle is credited as the chief engraver, although he only engraved the title page.* Collaert engraved fifteen of the book’s sixteen plates. Each print includes a Latin verse of six lines by the poet Johannes Boghe, describing the stories.

In The People of Judah Rejoicing over the Oath to the Lord, Boghe combined two verses from 2 Chronicles 15: “‘And they offered to the Lord...of the spoil which they had brought, seven hundred oxen and seven thousand sheep’ (verse 11); ‘And they swore to the Lord with a loud voice, and with shouting, and with trumpets, and with cornets’ (verse 14).”** This story begins after the people of Israel had turned away from the Lord. The prophet Azariah visited King Asa and encouraged him to turn back to God, and the nation would be rewarded. King Asa tore down the idols throughout Israel, as well as other towns he had conquered and then rebuilt the altar to the Lord. He called his people to come to the altar to celebrate. They sacrificed cattle, goats, and sheep to the Lord, promising to never turn their backs on God again. As they made the oath, there was shouting and trumpets and horns sounding, because the people were: wholeheartedly eager for this new promise.***

The engraving presents a complex composition with layers of worshipers, animals, the King, and musicians gathered around the high altar. Musicians stand to the left and play pipes, horns, and tambourines. Collaert captures both the chaos and joy pervading the scene, rendering in detail all the busy activities: the musicians playing their instruments, the loud voices shouting to the Lord, the High Priests tending the altar, the grunts and groans of animals awaiting sacrifice, the boisterous prayers of the people, the crackle of the fire on the altar as burnt offerings rise up in smoke.

Adriaen Collaert remained a prominent and respected citizen, active in the city life of Antwerp until his death in 1618.

*The title page depicted personifications of Harmony, Melody, and Rhythm.
**Sotheby’s, “Jan van der Straet, Called Stradanus.” sothebys.com.  http://www.sothebys.com/en/auctions/ecatalogue/lot.6.html/2013/old-master-british-drawings-l13040 Accessed 24 June 2019.
***The drawing [#6] sold at Sotheby’s Old Master & British Drawings including French Masterworks from the Dormeuil Collection auction in London in 2013. The Sotheby’s description of the drawing records indentations of where the drawing would have been transferred to an etching plate.