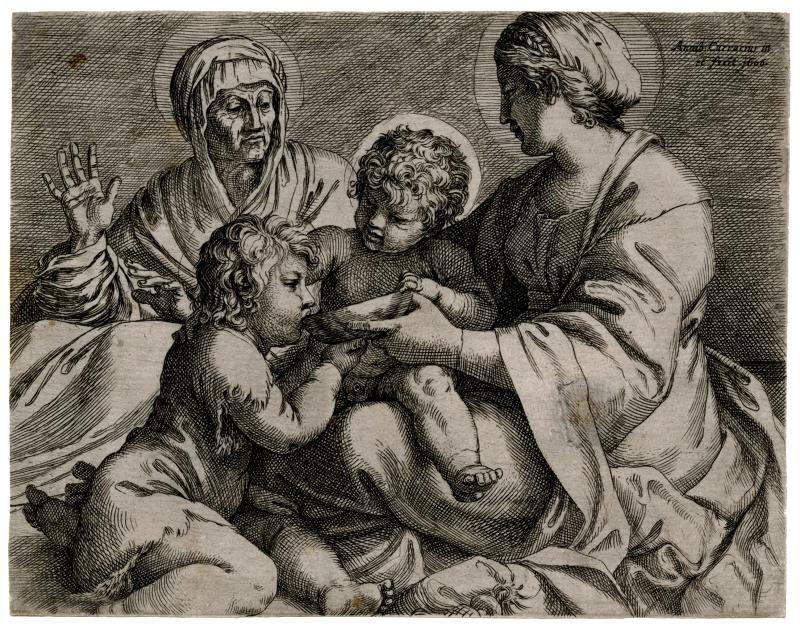 Annibale Carracci was one of the forefathers of the Italian Baroque art movement. Together with his older brother Agostino (1517-1602) and cousin Ludovico (1555-1619), Carracci changed Italian painting from the idealistic Mannerism to a more natural style. He studied the great northern Italian Renaissance artists such as Titian (1488-1576) and Veronese (1528-1588) and created works similar to their styles adding his personal flair. Carracci invented a new painting method directly from nature, where he captured movement and lighting effects with broken brushwork. Famed artist Caravaggio (Italian, 1571-1610) took inspiration from Carracci’s art and modeled his own works in a similar fashion.

Carracci was born in Bologna and most likely trained with his family, though little is known about his early life.* In 1582, Agostino, Ludovico, and Annibale Carracci opened their own painters’ studio, Accademia degli Incamminati (Academy of Those who are Making Progress). Soon, Carracci shook the art world with his early realistic figure paintings. Many favored the Platonic ideal of beauty found in Mannerism and felt Carracci was not treating the subject matter with appropriate dignity.

Mannerism was developed in response to Renaissance art, which dates from the 1300s to the 1600s, flourishing between the 1520s to 1590s. The movement distanced itself from the Renaissance’s classical themes, focusing instead on style and figural composition. Value was placed on the effortless solution of artistic problems, artificiality, elegance and sensuous distortion of the human figure. Mannerism, at times, turned into a more exotic form that depicted the grotesque and inexplicable. The Baroque era, characterized by extravagance, and grandeur, followed Mannerism. Carracci’s art began at the end of the eccentric Mannerist period and continued through the beginning of the exaggerated Baroque era.

Madonna and Child with Saints Elizabeth and John the Baptist is an engraving created in 1606. The print depicts an intimate scene of Christ as a child with his mother Mary, Aunt Elizabeth, and cousin John the Baptist. The Madonna holds the infant Jesus on her lap, both mother and child offering a bowl from which a young John drinks. Behind them, Saint Elizabeth holds her hand out in prayer. The four characters fill the picture plane. Done near the end of Carracci's career, it is one of twenty prints that he made of biblical subjects.

Carracci died in 1609. He was buried in the Roman Pantheon, as his wish was to be near Raphael in death.