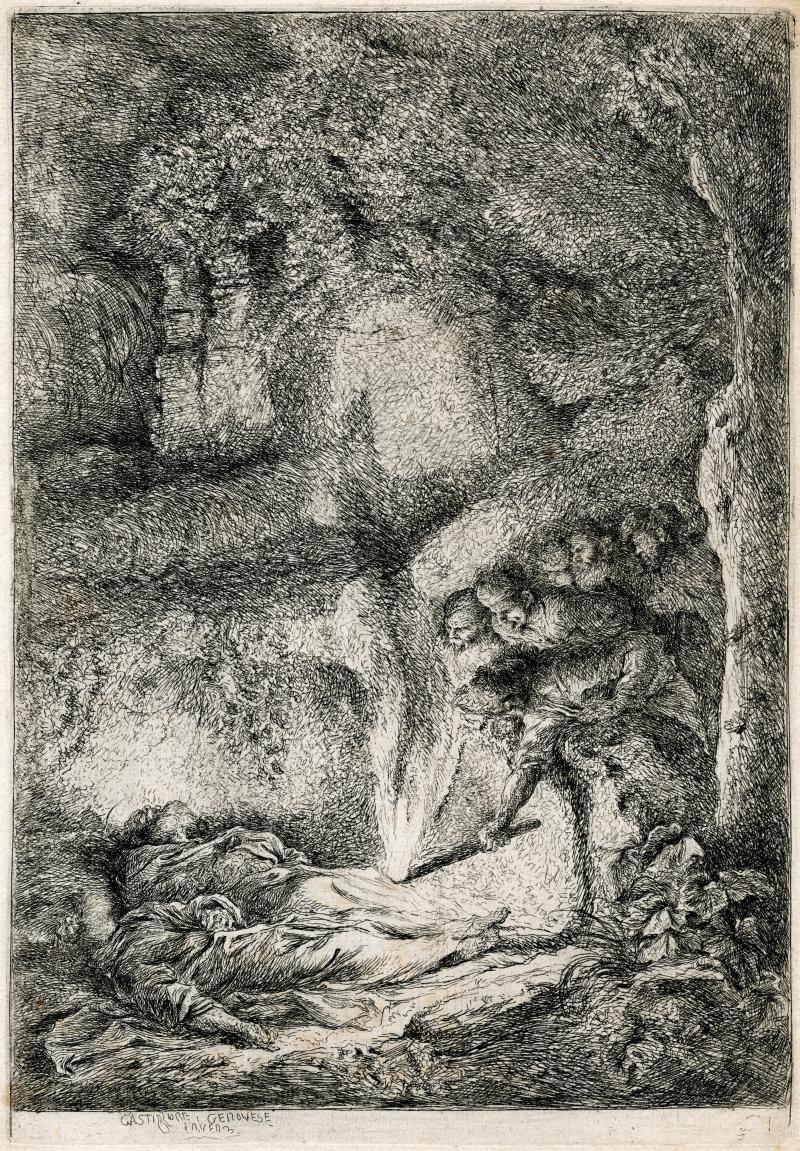 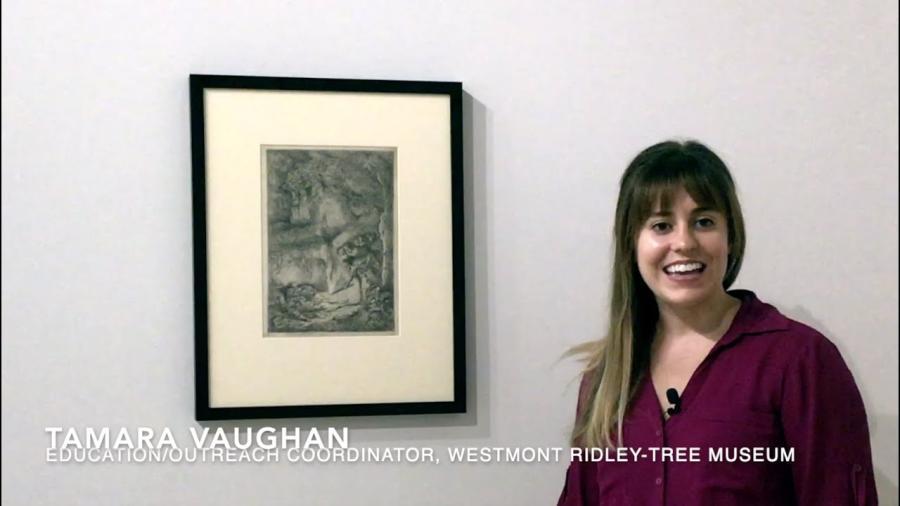 Born in Genoa, Italy, Giovanni Benedetto Castiglione’s early history and training are unclear. His art studies began with Italian art, but his curiosity about the art world reached beyond his native country. As a contemporary of Rembrandt van Rijn (Dutch, 1606-1669), he exchanged prints and ideas with the master throughout his career. He also had the opportunity to study works by Peter Paul Rubens (Flemish, 1577-1640), as well as Anthony van Dyck (Flemish, 1599-1641), both of whom had worked in Genoa. A painter, printmaker, and draftsman, Castiglione’s works addressed the impermanence of life and its endeavors.

Castiglione spent about ten years in Rome but returned to Genoa in his thirties. In 1648, he began working in the Mantuan Court, which had employed Rubens four decades earlier. During this time, he invented the monotype, a printmaking technique that began as a drawing or painting on a smooth surface, which was then transferred onto a sheet of paper by running it through a printing press. His skill with light and shade in his etchings was frequently compared to Rembrandt’s.

He was a “violent and impetuous man, who was repeatedly in court for assault,”* and his volatile temper might offer insight into why many of Castiglione’s artistic subjects focus on death, decay, and the futility of life. In Discovery of the Bodies of Saint Peter and Saint Paul, Castiglione uses the light of a torch to add drama to the narrative. The subject of the print is taken from a story from Jacobus de Voragine’s The Golden Legend, a compilation of stories from 1275 on the lives of the saints. Both Saint Peter and Saint Paul were sentenced to die by Agrippa. Peter was crucified upside-down on a cross, and Paul was beheaded. The bodies of both Peter and Paul were later taken by Greeks during early Roman persecution. As the Greeks were running away with the bodies, they hid them in the catacombs. A group of Christians, who had been following the Greeks, recovered the two bodies shortly after. This scene is Castiglione’s interpretation of the moment when the two bodies were found.

Castiglione’s use of tenebrism, or theatrical illumination, creates a profoundly somber setting. The figures become almost metaphysical in the luminous composition, where a single torch blaze reveals the spectacle. The staccato, delicate lines are rendered in tight but active strokes and flicker across the paper adding to the drama of the scene. Six men fill the door of the tomb, one holding a torch to better see the Saints’ bodies. A beheaded** Paul lies next to a bearded Peter, holding the keys to Heaven.

Castiglione’s later years were spent in Mantua, where he worked for the court. He died in 1164.

*Furness, Hannah. “Works by scandalous artist accused of murder to go on show at Buckingham Palace.” The Telegraph [London] 4 September 2013: Web Accessed on May 22, 2019.
**The Golden Legend tells of the days following Paul’s execution in which his head was found cast in the valley. A group of devout men placed both the body and head on a table, praying that God would rejoin the saint’s body. The Lord heard their prayers, and before the men’s eyes, the head rejoined the body.