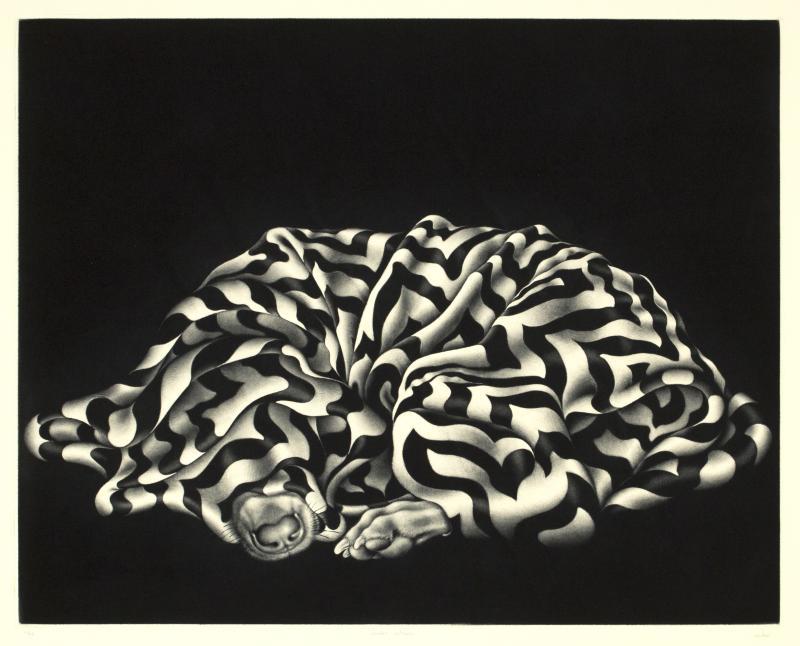 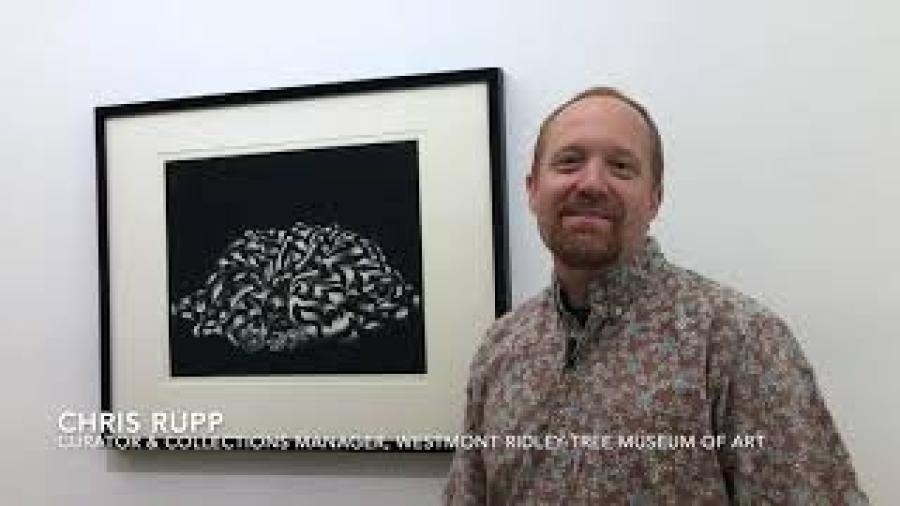 Carol Wax began her printmaking career in 1975, after a decade of professional training and performance as a classical flutist. By 1980, Wax ceased playing music professionally and switched her focus to becoming a full-time artist. As a printmaker, her area of interest was an uncommon and nearly forgotten intaglio printing technique of “mezzotint engraving,” more commonly known as “mezzotint.” The process involves using a curved steel hand tool with hundreds of needle-like points to “rock out” the surface of a copper plate, resulting in hundreds of thousands of tiny depressions, which when inked, wiped, and run through the press, prints as a solid black field. The image is then created by going back into the rocked plate surface and meticulously scraping, burnishing, and polishing. The tonal print ranges from velvety blacks to soft greys to bright whites, with a nuanced and soft appearance unique to mezzotint prints. Because mezzotints are such a labor intensive process, it mostly disappeared by the middle of the nineteenth century, as lithography provided a quick and less laborious alternative.

Wax’s preoccupation with mezzotint led her to extensive research on its nearly forgotten history and process, which in turn led to further experimentation in the field. She discovered lost techniques, developed new processes, and embraced the medium with a modern and innovative sense that fit well  within the realm of contemporary art. Her independent study culminated in the publication of The Mezzotint: History and Technique in 1990. This book was revolutionary for its revival of the process and is considered today as the preeminent book on the process of mezzotint. Publication of her book catapulted Wax’s career as an artist and author, and enhanced her reputation as a respected college professor and sought-after workshop teacher. Wax can take credit for reviving mezzotint from the eighteenth century and transforming it into something new and innovative for the twentieth and twenty-first centuries.

Wax took an old-fashioned, outdated technique and turned it into something modern. Likewise, in a humorous twist, she finds subject matter that is also “old-fashioned.” Wax’s work focuses on archaic objects of society, which have fallen out of favor, such as typewriters, manual phones, accordions, antique sewing machines, and more. Her works are best described as still-lifes with a flair for the dramatic. Wax focuses on intricate details using theatrical lighting and visual patterning effects. Much of the drama in her works comes from the intense spotlighting effect the mezzotint process provides, working from deep, dark blacks to the whitest of whites. Her nostalgic connection to the past asks the viewer to take a serious look at our technology today and to question what  we will think of our valued devices in fifty years.

Under Wraps is from a series exploring the folds and creases of highly decorated vintage fabrics. These works are a tour de force in terms of complex patterns and reveal the influence of the 1960s and 1970s Op Art movement. Almost lost among the delicate folds and hard edge zig-zag patterning, our eyes settle on what is “under wraps” -- it is Wax’s Weimaraner, Cecil, cleverly camouflaged under an antique blanket.