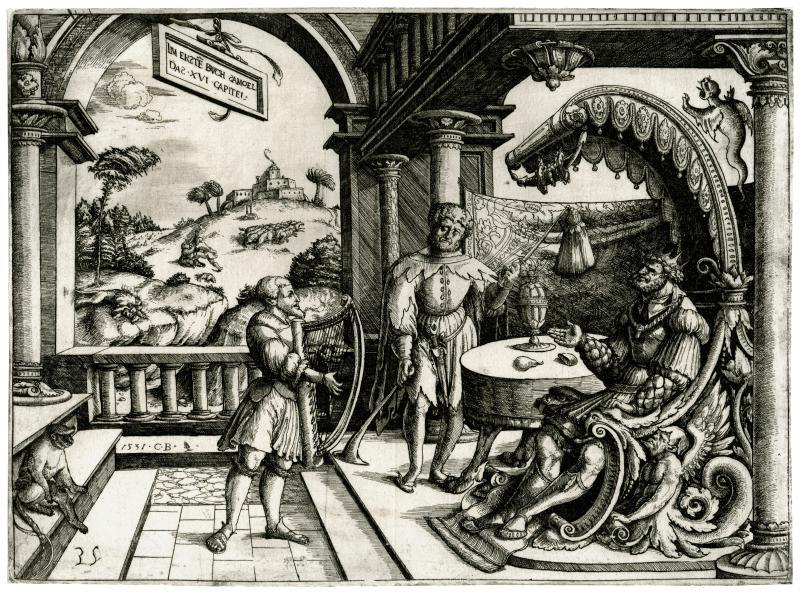 Most art historians believe Christoffel Bockstorffer, or the Master from Konstanz, was born in Memmingen, Germany to the painter, Thomas Bockstorffer. The earliest archives relating to Bockstorffer’s career are from 1513 in Constance, Germany, and records of his work in Constance remain consistent until 1543. Although known for his paintings and etchings, Bockstorffer was also a skilled stained glass designer in Constance, often working with the glass painter Caspar Stillhart (German, d.1548). In 1522, Bockstorffer completed what might be the most important work in his career, an elaborate high altarpiece for the Münster of Saint Gall. Bockstorffer’s tax documents reveal that his livelihood diminished during the Protestant Reformation because of the Church’s refutation of religious art. The altarpiece for the Münster of Saint Gall was a casualty of the Protestant Reformation, destroyed by Protestant zealots.*

Bockstorffer’s legacy has sparked disagreements among scholars. Many believe that Christoffel Bockstorffer is also the printmaker who signed works “C.B.” next to a small drawing of a pine cone. The pine cone is the emblem of Augsburg, Germany where Bockstorffer likely trained, and the printmaking style is figurally similar to that of the Hopfer print shop.** In the etching David Playing the Harp before Saul, the date with the initials “C.B.” and the pine cone can be seen on the ground behind and to the left of David’s feet. Scholar Bernd Konrad has challenged the identification of the initials and recently began changing earlier attributions to Bockstorffer, claiming that in the artist’s confirmed works, his figures have “broad faces and stocky bodies with short limbs and distortedly draped garments.”*' Konrad attributes many of Bockstorffer’s works, including the altarpiece for the Münster of Saint Gall, to Matthàus Gutrecht the Younger. Further, Konrad believes the “C.B.” in the etchings is the signature of a lesser known artist from Augsburg named Conrad Baur. Other scholars are not convinced by Konrad’s argument and continue to attribute most of these works to Bockstorffer.*'*

In David playing the Harp before Saul, Bockstorffer’s subject is drawn from the biblical story recorded in I Samuel where a young David plays music to calm an agitated King Saul.*" The banner above David reads "IM ERSTE BVOCH SAMOEL / DAS XVI CAPITEL," which translates from German: “In the first Book of Samuel/The sixteenth chapter.” A helpful narrative tool, this text communicates to the viewer that this scene depicts David playing music for Saul before killing the giant Goliath, which brought David fame and recognition from the kingdom, but fear and loathing from King Saul.

In 1543, Bockstorffer moved to Colmar, France and soon to Mülhausen, France, where he produced painted decorations for the Mülhausen City Hall in 1552, a year before his death.

*Death of the Virgin from 1523 was spared the Reformation iconoclasm and is his only surviving signed and dated painting, currently in a private collection in Lucerne.

**A print shop in Augsburg, run by Daniel Hopfer (1470-1536). The workshop was focused on woodcut book illustrations and single-sheet etchings and sets.

*'* The Met, which had changed their attribution to Conrad Bauer for this print along with many others, just recently changed the attribution back to Bockstorffer.