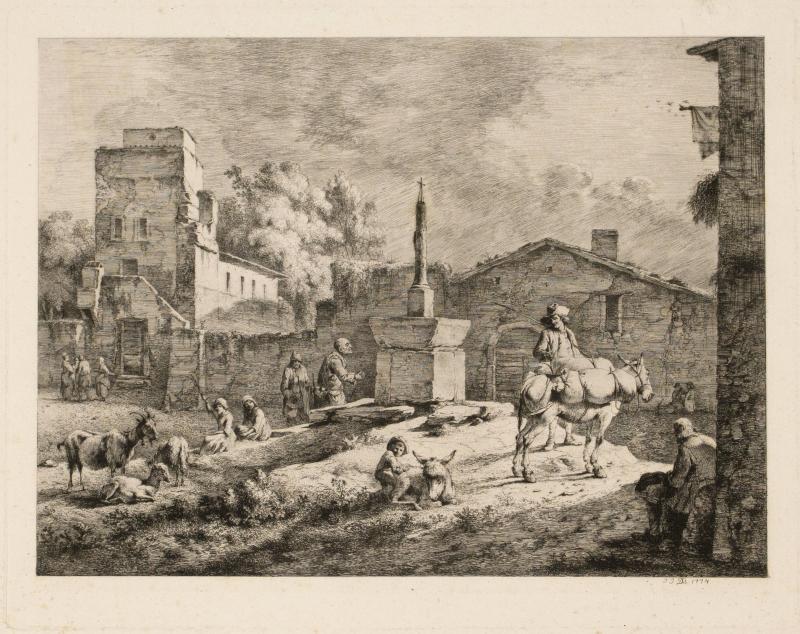 Jean Jacques de Boissieu, born in Lyon, France, was largely a self-taught artist. He spent his early career traveling through Europe and cultivating a special fondness for the Italian countryside. Boissieu preferred landscape painting and liked to sketch outdoors and then compose his landscape in the studio. In 1771, he returned to Lyon, and found it was his native landscape that most captivated his interest. Boissieu focused on drawings in ink and wash and printmaking, because he had a sensitivity to the odor of the turpentine used in oil painting. He admired and studied the etchings of Rembrandt van Rijn (Dutch, 1606-1669), and his technique pays homage to the Dutch master’s style. His etchings feature country characters and rural architectural structures, typical of Dutch landscape paintings. Like Rembrandt, he could deftly capture the drama of light and shadow, creating an atmospheric ambiance with clear, sharp lines. Boissieu achieved great commercial and critical success; his studio was a popular stop for visitors to Lyons, and because his prints were widely distributed in the eighteenth century, his reputation flourished throughout Europe.

The subject of this etching is Saint-Andéol-le-Château, a French village in the district of Lyon that was built atop a well-preserved medieval village from the seventh century. The first recorded mention of the town dates to the tenth century linking Sanctus Andeolus with Lyon’s Cathédrale Saint-Jean-Baptiste.

Throughout the Middle Ages, Saint Andéol-le-Château was a prosperous village with numerous wine merchants, tradesmen, and craftsmen, and by the seventeenth century, the town had developed a reputation for its textiles. Saint Andéol-le-Château began to decline after the French Revolution, as the vineyard’s production waned. It continued its decline into the twentieth century. In January of 2018, the town merged with Chassagny and Saint-Jean-de-Touslas to create a new municipality of Beauvallon.

Boissieu etched this view of Saint Andéol only fifteen years before the French Revolution, when the town would have been a bustling location for textiles and wine. It is a scene of everyday life. The townspeople mill about, and in the distance on the left, are the remnants of the old fortifications. Vue de Saint-Andéol, en Lyonnais is a good example of Boissieu’s strong influence by the Dutch masters. The artist infuses soft atmospheric effects to the simple rural scene. He demonstrates a skilled use of light and shadow and keen attention to architectural details. It is a busy composition, yet Boissieu creates a calm moment by drawing the viewer’s attention to the praying man kneeling at an old cross. As in most of his etchings, Boissieu finds beauty in simplicity.