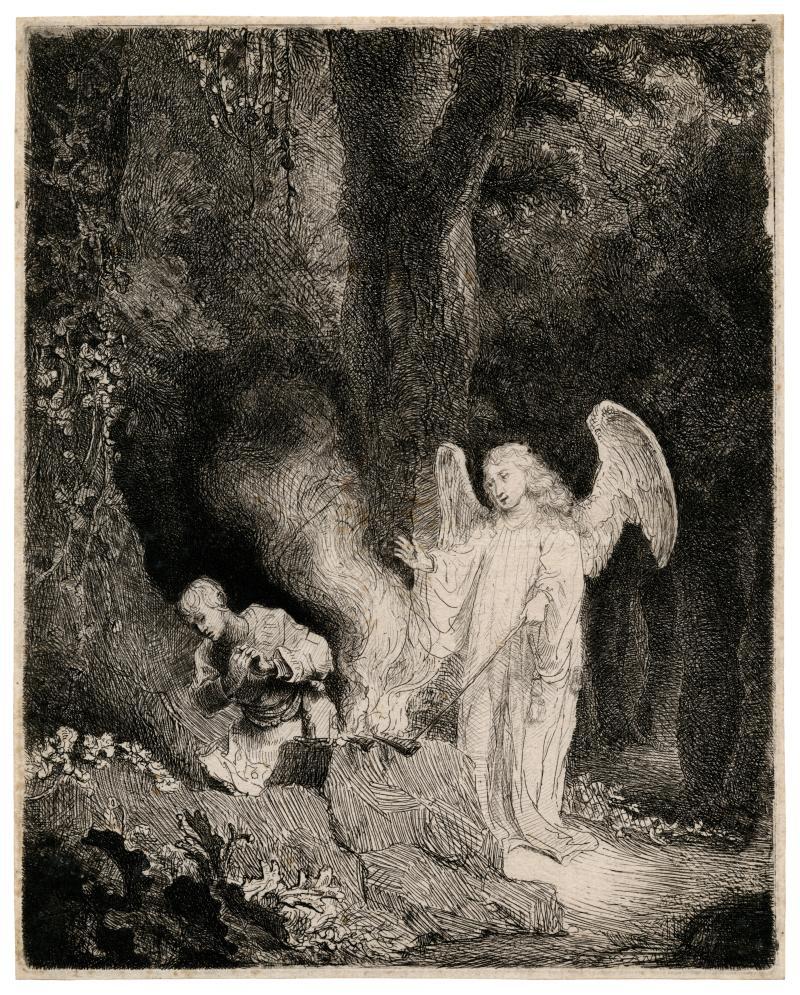 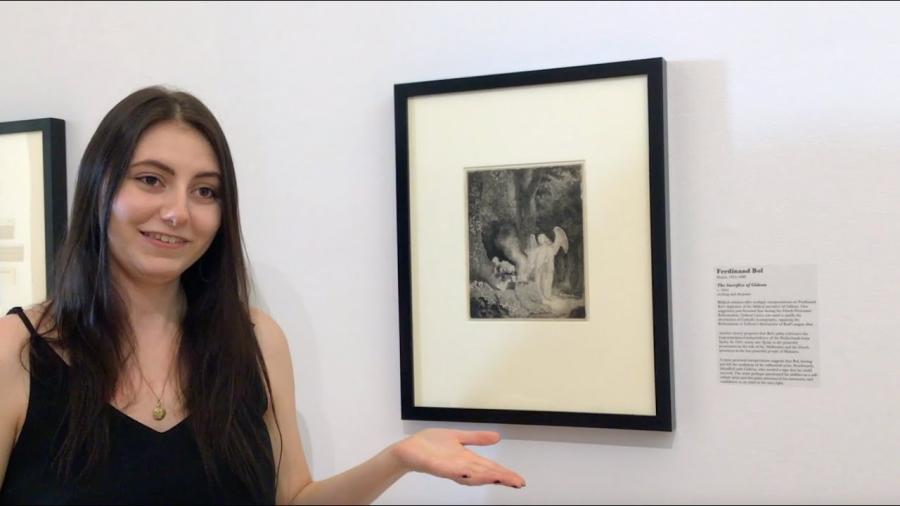 Ferdinand Bol was a talented protégée of Rembrandt van Rijn. He was born in Dordrecht and enjoyed a privileged youth, the son of a successful surgeon. Bol left Dordrecht for Amsterdam and joined the atelier of Rembrandt, where he was among Rembrandt’s most skilled students. Their styles are so similar that even today, scholars often misattribute works to Rembrandt or Bol.

By the early 1640s, Bol likely had just left Rembrandt’s studio when he turned to the subject of Gideon, first making a painting, followed by an etching of the same subject. The story of Gideon comes from Judges 6: 20-23. The Midianites ruled and oppressed the people of Manasse, and Gideon, a young man, desperately wanted to fight for the people of Manasse but doubted his leadership, his own abilities, and the strength of his soldiers. As he hesitated in his struggle with faith and self-confidence, an angel suddenly stood before him and announced that Gideon had found favor with God. Gideon still mistrusted the messenger and asked for a sign from God. He was told to put meat and bread on a rock; when the angel touched it, immediately the food was demolished by fire. Gideon’s faith was revived and he believed that God would send him the victory. As God had directed him, Gideon tore down the Altar of Baal.

Bol’s setting for the print is deep in the forest with Gideon kneeling in front of the mouth of a cave; the winged angel stands on the right having just touched the rock with fire. Reflecting the light of the fire, both figures have been wiped clean of ink to print dramatically white against the darkly inked background.

The story of Gideon is an interesting choice of biblical narrative for Bol. In the Dutch Protestant Reformation, a century before the Bol print was made, Gideon’s story had been used to justify the destruction of Catholic paintings, sculptures and reliquaries. The Dutch equated the reformation to Gideon’s destruction of Baal's pagan altar. Because of the historic identification of the Netherlands with Gideon, it is possible that Bol’s painting of 1640 and print of Gideon in 1641 celebrated the long-anticipated, full independence of the Netherlands from Spain. In 1641, peace was at hand, and many saw Spain as the powerful persecutors in the role of the Midianites and the Dutch provinces as the less powerful people of Manasse. In the late sixteenth century and early seventeenth century, the people of the Netherlands won their independence from Spain.

One other interpretation of the print is more personal to Bol. Having just left the workshop of the famous and influential Rembrandt, Bol like Gideon, may have questioned his abilities as a self-reliant artist. The painting and print of Gideon announced his autonomy and affirmed his confidence as an artist in his own right.

A different direction in Bol’s artistic career came with his marriage in 1653 to a woman from a wealthy family. While he continued to paint, he was not dependent on a career to support himself. His wife died and he married another influential woman in 1669. Bol is not known to have painted again after his second marriage. The artist died in 1680.