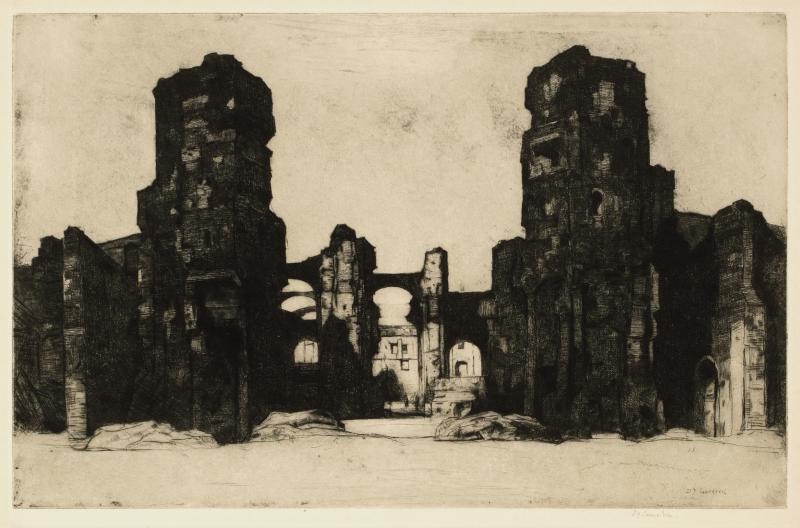 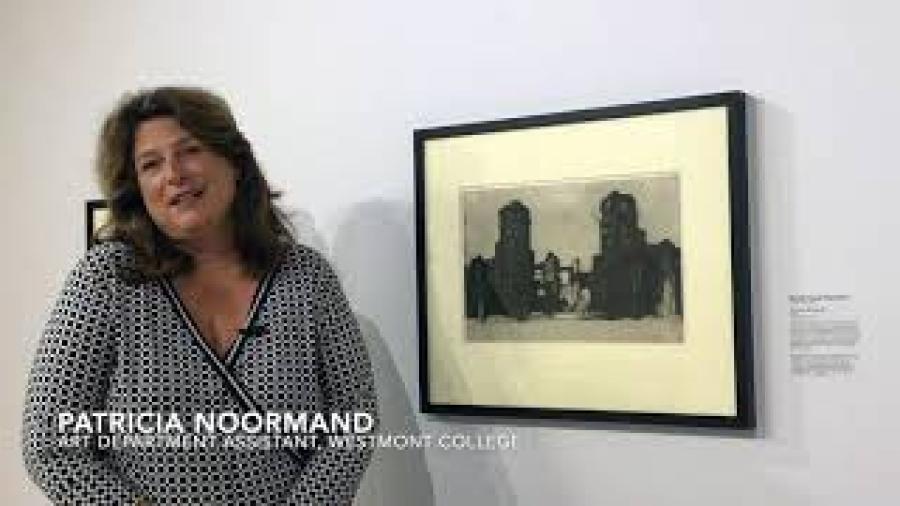 David Young Cameron was a Scottish printmaker whose skill in drypoint created dramatic tonal effects in land- and cityscapes. Though he sometimes worked as a painter and draftsperson, printmaking was where Cameron excelled. His prolific work in the nineteenth and twentieth centuries earned him the consideration of one of Scotland’s most influential artists.

Cameron was born in Glasgow, and he began his studies at Glasgow School of Art when he was only sixteen years old. He went on to study at Edinburgh School of Art, where he refined his skills in etching, gaining international recognition by the early 1890s. A signature style in Cameron’s work is how few lines he used, while still capturing a picturesque atmosphere in his landscape prints. As the son of a preacher, Cameron used his religious roots to evoke an element of profound spirituality in his art. From the natural landscapes to architectural monuments of human creativity, he could see past the physicality of his subject and depict its emotive essence. Cameron was knighted in 1924 and continued to work as a painter and etcher until his death in Perth, Scotland in 1945.

Thermae of Caracalla is Cameron’s portrayal of the second largest Roman public baths.* While serving on the faculty of Painting and Engraving at the British School in Rome, Cameron was able to explore the city, rendering different landscapes including the Thermae of Caracalla. As one of the largest prints in his oeuvre, Cameron’s intention must have been to capture the imposing magnificence of the ruins. His viewpoint is of the central part of the ruin, where two tall, dark structures flank the entrance into what was a series of hot, tepid, and cold baths. On the right and left, were vaulted chambers, which served as study rooms, a library, shops, a lecture hall and more. On either end were palestras, which were large gymnasiums.

Cameron’s print of Thermae of Caracalla is done in drypoint and etching. The drypoint technique gives the work its rich, black, velvety texture; the residue of metal fragments, called the burr, are left on the plate after a needle is dragged across a copperplate, and those vestiges of the metal will hold extra ink that is then released into fuzzy, black lines during the printing process. The etched lines are more distinct and delicate. Cameron has wiped the foreground clean to print white, and it stands in stark contrast to the dark, ominous fragments of architecture. In Roman times, the baths were lavishly decorated and intended as a symbol of Rome’s affluence and magnificence. In Cameron’s 1923 portrayal of the ruins, the decoration is gone, many walls have vanished, and vaulted ceilings have collapsed, yet the artist’s print still captures the enormity of the design and the grandeur of the architecture, offering a hint into the stylish, communal lives of the ancient Romans.**

*The Thermae of Caracalla were built between AD 212 and 216 during the reign of Emperor Marcus Aurelius Antonius, or Caracalla. Anyone was welcome to the baths, in fact they were an important aspect of the Roman social life, and in the third century, they would have been awe-inspiring in both size and opulence.

**Cameron made a second print of the Baths: The Tepidarium; Thermae of Caracalla, etching and drypoint, in 1925.