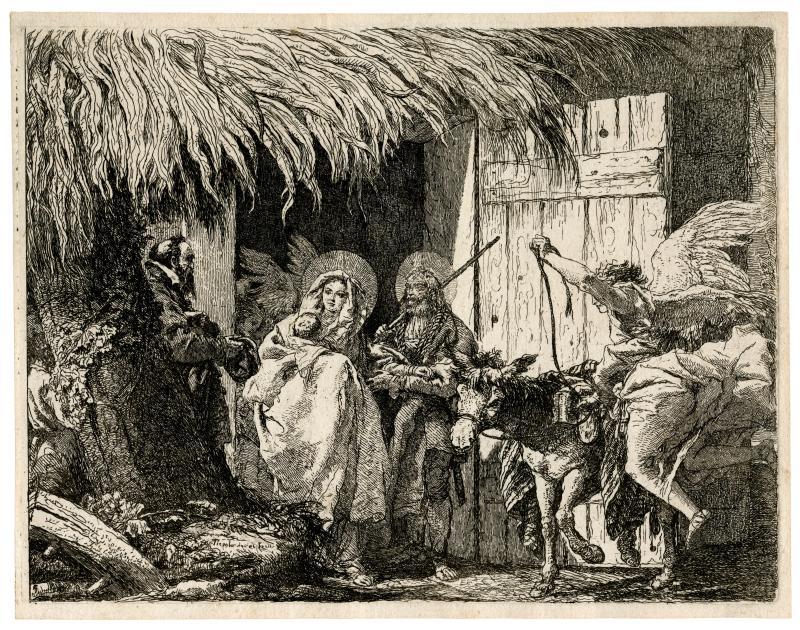 Giovanni Domenico Tiepolo was the eldest son of the famous Italian Rococo artist, Giovanni Battista Tiepolo (1696-1770). The younger Tiepolo trained in his father’s studio working as an assistant and becoming a skilled protégé by the age of twenty. He and his father were both prolific and well-regarded, and the two worked together in Germany, Spain, and Italy until the elder Tiepolo’s death in 1770.

While working with his father in Germany in the 1750s, the younger Tiepolo endeavored to separate his work from his father’s. He was twenty-three years old when he began a series of twenty-seven etchings titled The Flight into Egypt. Work on the series spanned two to three years; the earliest is dated 1750, the year he and his father moved to Germany, and the last in 1753, as the two artists were leaving Würzburg. With this venture, the artist sought to prove that he could invent twenty-seven compositions on the same subject without repeating himself.

The biblical narrative on the flight* is brief, but numerous legends surround the story, many of which are treasured stories told by the Coptic Christian church, and have attracted Western artists’ imaginations in portraying the dramatic journey in Christ’s early life. With the twenty-seven etchings, Tiepolo depicts the angel warning Joseph, Mary, and the Christ child to leave; Simeon and Anna the Prophetess meeting the child; the Holy Family leaving Bethlehem and traveling by donkey through different pastoral settings; the Family on a boat traveling across a river; the Family traveling across land, encountering various townspeople; and finally, Joseph, Mary, and Jesus at the gates of their Egyptian sanctuary.

Joseph and Mary Prepare to Leave is the fifth etching in The Flight into Egypt series and depicts the story of Simeon meeting the Christ child. Simeon was a devout man who was promised that he would not die until he had seen the Messiah. After taking the child in his arms, he praised God saying, Sovereign Lord, as you have promised, you may now dismiss your servant in peace. For my eyes have seen your salvation.** In most depictions, the Holy Family meets Simeon in the Temple, but Tiepolo chose a more rustic setting, likely just outside the stable as the travelers prepare to depart on a donkey. Simeon, wearing his priestly robes and standing to the right of Mary and Joseph, has removed his hat out of respect. Tiepolo captures the night scene with dramatic contrasts of black and white. Mary steps out of a dark space, holding the baby Jesus covered by a white blanket. Tiepolo symbolically references Simeon’s prophecy of the Crucifixion by depicting the stable door’s crossed planks in the brightest white.

The younger Tiepolo was a successful painter, engraver, and draftsperson, and although hugely talented in his own right, he was often overshadowed by his father’s success. After his father’s death, his manner of painting and drawing changed, often incorporating a satirical and witty narrative. Giovanni Domenico Tiepolo died in Venice in 1804.

* The Flight into Egypt is recounted in the Book of Matthew 2:13-15: When they had gone, an angel of the Lord appeared to Joseph in a dream. ‘Get up,’ he said, ‘take the child and his mother and escape to Egypt. Stay there until I tell you, for Herod is going to search for the child to kill him.’ So he got up, took the child and his mother during the night and left for Egypt, where he stayed until the death of Herod. And so was fulfilled what the Lord had said through the prophet: ‘Out of Egypt I called my son.’ (NIV)
**See Luke 2:29-32.