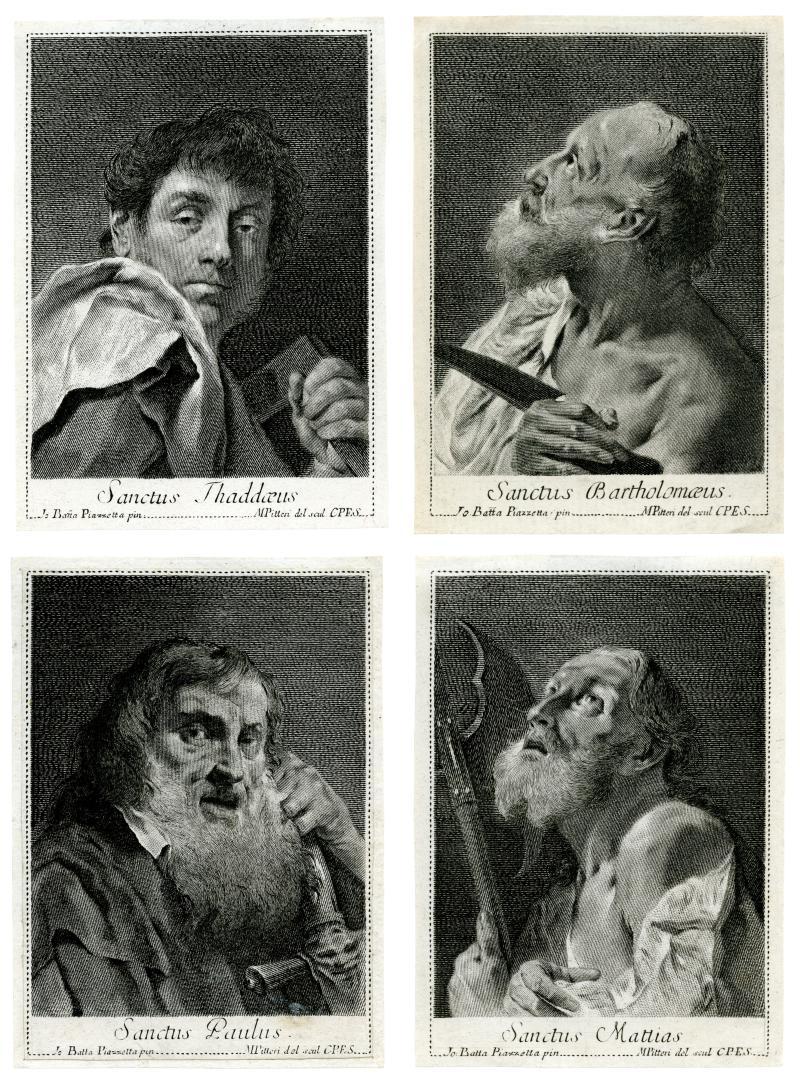 Giovanni Marco Alvise Pitteri was an Italian engraver born in Venice, Italy and was part of the late-Baroque and early-Rococo periods. He was known for an engraving technique he developed, comparable to the technique of Claude Mellan (French, 1598-1688), that produced highly finished prints, sought after for their realism. The technique involved densely incised lines, such as dots and small dashed lines, to create volume. Pitteri also used heavy crosshatching and in other areas, lines with tiny bumps and knobs, to give his prints remarkable shading and texture.

Pitteri often collaborated with Giovanni Battista Piazzetta, an Italian Rococo painter and draftsperson,
whose realistic portraits, often of people on the streets of Venice or genre scenes of daily Italian life, were very popular in Venice and throughout Europe. One of Pitteri and Piazzetta’s most admired collaborations was the series commonly called, The Holy Family and Apostles (1744), which included these four prints.

Saint Thaddeus, or Jude, is believed to be related to Jesus in one of two ways. One theory is that they are brothers,* and the other is that Thaddeus was the son of James, the brother of Jesus.** Thaddeus, like Jesus, was a carpenter before becoming an Apostle and is depicted with his carpenter’s square. He is the patron saint of lost causes, Armenia, and hospitals.

Saint Bartholomaeus, also called Nathaniel, was one of the twelve apostles chosen by Christ. He, along with Thaddeus, are said to have brought Christianity to Armenia and are celebrated for founding the Armenian Christian Church. Bartholomaeus earned his martyrdom when he was flayed alive and beheaded. He is depicted with the curved flensing knife with which he was skinned. He is the patron saint of Armenia, tanners, shoemakers and butchers.

Saint Paul was originally known as Saul from Tarsus. A highly educated Jew, Saul made it his mission to persecute new Christians. His own Christian conversion experience and renaming from Saul to Paul is an important part of the New Testament, as at least thirteen books are attributed to Paul. He planted numerous churches in Asia Minor and Europe until he was sentenced to beheading by Emperor Nero. He is the patron saint of missions, theologians, evangelists and gentile Christians and is identified by the sword as seen in this print.

Saint Matthias replaced the Apostle Judas Iscariot, who betrayed Christ and then committed suicide. He is the patron saint of carpenters, tailors, alcoholics, smallpox and hope and is depicted with his attribute, the axe.