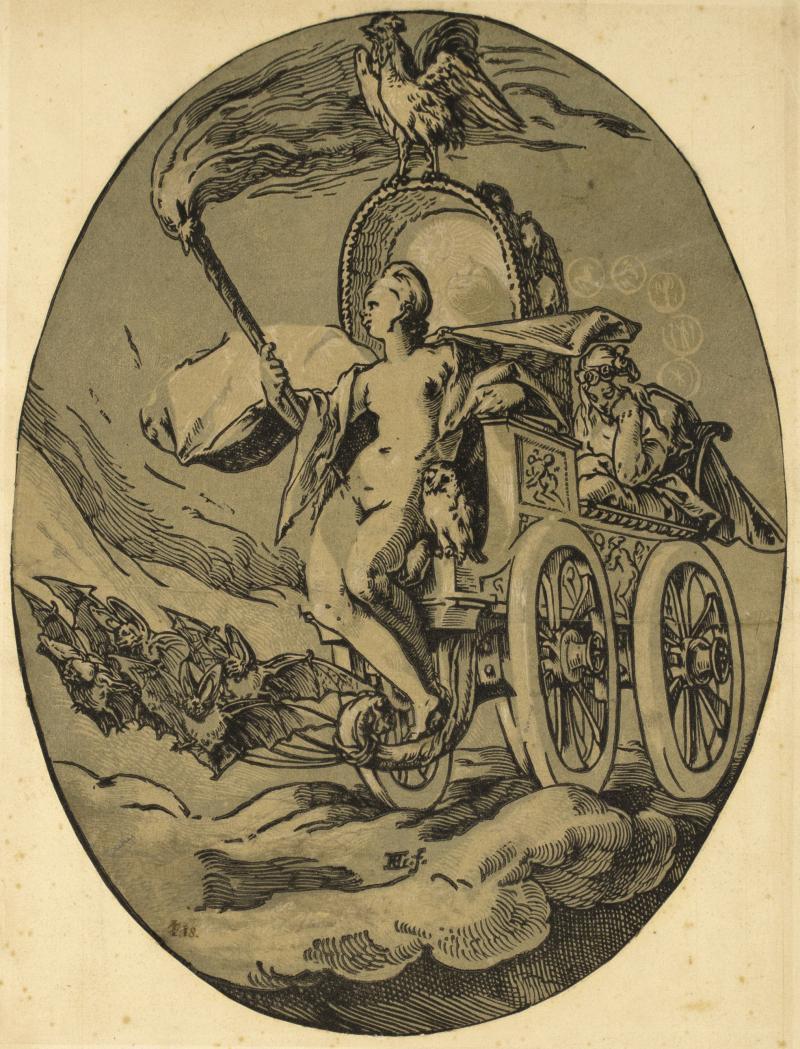 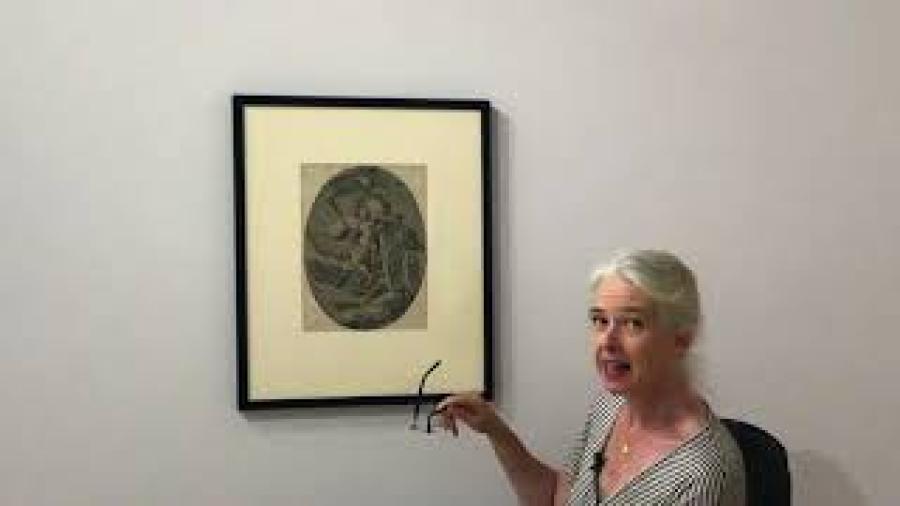 In addition to being a prolific draftsperson and skilled painter, Hendrick Goltzius, was the most lauded printmaker of the early golden age. Self-consciously following in the steps of his Northern-European forbearers, Albrecht Dürer and Lucas van Leyden, Goltzius approached printmaking as an art form in its own right.

Born in Germany near the Dutch border, Goltzius moved to Haarlem at the age of nineteen, along with his artist-humanist teacher, Dirck Volckertsz Coornhert. In Haarlem, Goltzius married a woman of means, which enabled the young artist to establish a thriving studio and workshop from which his reputation spread south to Italy and east to the court of Rudolph II in Prague. Theoretically minded, Goltzius, along with his learned and artistic friends Karel van Mander and Cornelis van Haarlem, established an academy of sorts in the 1580s, dedicated to the rigorous study of the male nude, which was understood as the foundation of all worthy art. Goltzius’ classically oriented, ambitious, and investigative approach to printmaking is manifest in Nox, an experimental chiaroscuro woodcut done between 1588 and 1590.

Nox is one of a series of seven oval chiaroscuro woodcuts generally designated as The Deities. Demogorgon represents creation, and then three male/female pairs represent the sea (Oceanus and Tethys), the underworld (Pluto and Proserpina), and the heavens (Helios and Nox). Nox, or “Night,” rides a chariot drawn by bats, and is carrying a personification of sleep. Above sleep’s head, astrological signs designate the hours of the night. Nox is accompanied by an owl and a cock, birds designating the beginning and the end of the Night’s reign.

Chiaroscuro prints, with their extremes of dark and light moderated by intermediate half-tones, mimic the look of colored wash drawings. They also require multiple blocks, thus combining the attractions of technical challenge and sophisticated result. Given the experimental nature of these prints in Goltzius’ entire oeuvre, and the fact that he signed them with his distinctive HG monogram, followed by an “f” for fecit (HG made this), it is highly likely that Goltzius cut the blocks himself.

The coloring of this particular impression indicates a later date. There are a handful of impressions of The Deities in a light, muted palette. There are many extant impressions with this darker tan/green coloring. Nancy Bailler and Marjolein Leesberg both point to the famed Amsterdam printer Willem Jansz. Blau as the likely publisher of these later editions. 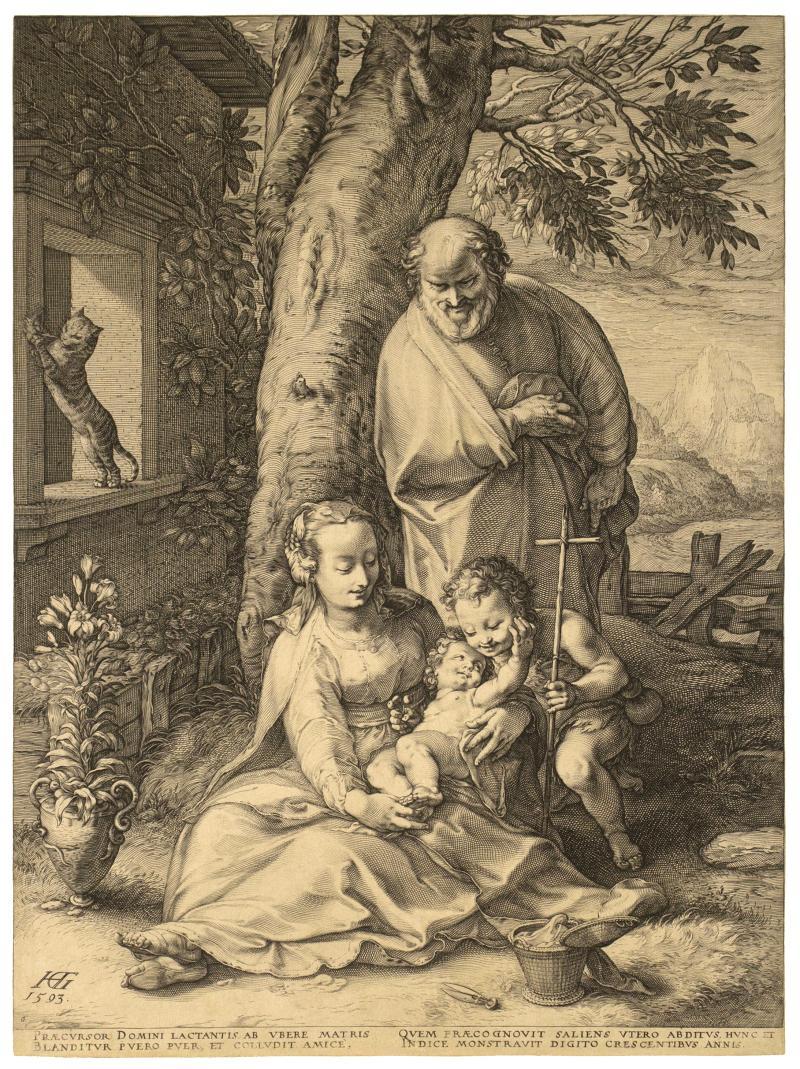 In his biography of Hendrick Goltzius, Karel van Mander, the celebrated chronicler of Northern European art, singles Goltzius out for highest praise, calling him “a rare Proteus or Vertumnus in art, able to recreate every figure and manner.”* The skill in question is on display full force here, in Goltzius’ Holy Family with the Young John the Baptist. This large-format engraving is the last in a series of six prints on The Life of the Virgin. Combining virtue and virtuosity, Goltzius’ Life of the Virgin series not only bridges the devotional divide between Catholics and Protestants, it also, via emulation, situates the artist firmly at the apex of the western print tradition—both Italian and Northern.

The Holy Family with the Young John the Baptist creatively synthesizes two paintings by the Italian artist Federico Barocci (c. 1533-1612), known to Goltzius via reproductive prints by the Dutch engraver Cornelis Cort (c. 1533-1578). Cort was sought out by Italian artists for his talent in translating the effects of painting into the monochrome and linear medium of engraving. Here, Goltzius references the landscape setting of Cort’s print of Barocci’s Rest of the Flight into Egypt** and adapted the facial type of Mary and the grace of the grouping from Cort’s reproduction of Barocci’s Madonna del Gatto.*' The cat in the windowsill is a knowing reference to the original for the canny connoisseur. Other prints in the series creatively appropriated the styles of Dürer (German, 1471-1528) and Lucas van Leyden (Dutch, 1494-1533) in addition to that of Cornelis Cort, and took representational cues from Raphael (Italian, 1483-1520) and Jacopo Bassano (Italian, c. 1510-1592) in addition to Frederico Barocci.

While modern viewers are understandably captivated by Goltzius’ stylistic virtuosity, equally notable is his sensitivity to virtue—specifically Marian virtue. In the 1590s, Haarlem was only a few years away from its 1581 turn from Catholicism to Protestantism. In The Life of the Virgin, Goltzius managed to create a series that would be acceptable to both audiences. He chose a subject—the Virgin Mary—dear to the hearts of Catholics, yet chose scenes sufficiently rooted in scripture and keyed to Mary’s virtue and motherliness (rather than her elevated status as the first among the saints) so as to be attractive to Protestants as well. In The Holy Family, for example, the vase of lilies on the left, and the sewing basket on the right are elements repeated from The Annunciation, symbols of virginal purity and domestic dutifulness. The inscription, derived from devotional writings by Catholic authors Franco Estius and Cornelis Schonaeus, includes references to the visitation and to later passages concerning John the Baptist.*'*

Goltzius’ religious sympathies are unknown. But The Life of the Virgin series was dedicated to a Catholic Patron, Wilhelm V of Bavaria. Wilhelm was so pleased with the series that he awarded Goltzius a gold chain with a royal portrait medallion on it—a token of highest esteem.

*Proetus, a deity of sea and river, was associated with changeability. The adjective “protean” carries positive associations of versatility, creativity and adaptability. Similarly, Vertumnus was the deity of the seasons who could change shape at will. Karel van Mander, Het schilder-boeck. Haarlem, 1604. Fol 285r.
**Now lost
*' Currently in the collection of the National Gallery, London.
*'* Inscription translates to: “The herald of the Lord, who is suckled at his mother’s breast, like a child, strokes the child and plays sweetly with him; the baby whom he recognized, leaping up, while he was still in his mother’s womb, he also pointed to with his finger when they were a little older.” Translation from Leeflang and Luijten, Hendrick Goltzius (1558-1617): Drawings, Prints and Paintings, 211, 335, cat. no. 75.6.