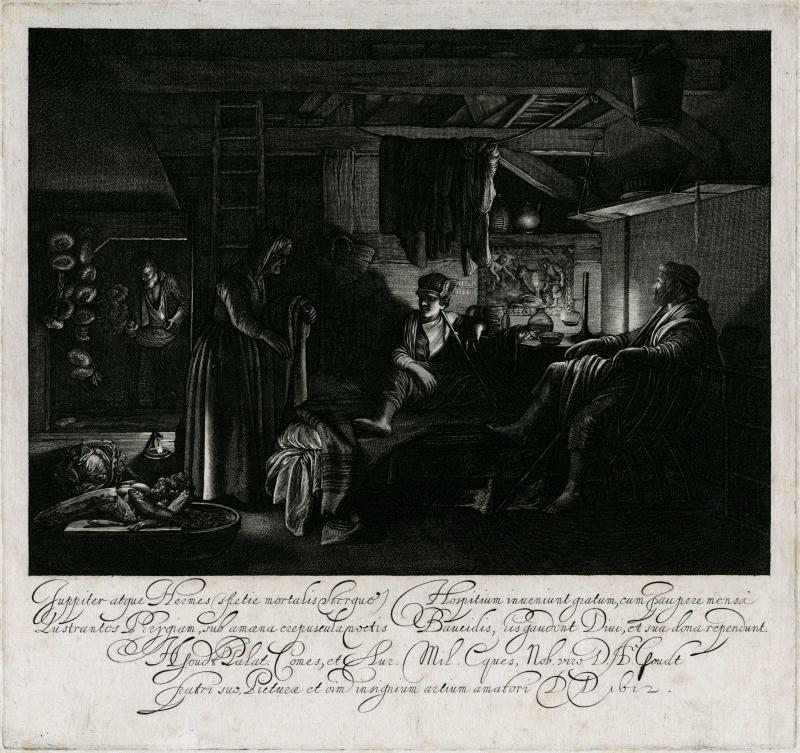 It is believed that Hendrick Goudt’s early education in printmaking was in The Hague, before further training in Rome as the pupil of the German painter, Adam Elsheimer. Goudt would engrave prints after Elsheimer’s paintings and continued this practice after the painter’s death in 1610. In 1611, Goudt packed up his belongings, and a large collection of Elsheimer’s work, and moved to Utrecht, where he continued engraving both his own work and the works of others.

In the preceding years before his death, Elsheimer’s subject matter came from the Roman author Ovid’s Metamorphoses, and he created numerous paintings based on the stories, including Jupiter and Mercury in the House of Philemon and Baucis (1609-1610). Ovid’s characters, Philemon and Baucis, were an elderly man and woman living in the town of Phrygia. They opened their home to two weary travelers, who, unbeknownst to them, were the gods Jupiter and Mercury in disguise. The gods recognized the sacrifice made by this couple and rewarded Philemon and Baucis’ generosity by miraculously replenishing the wine bowl throughout the evening. Once the gods revealed themselves, they took the couple up the mountainside. The four watched as all of Phrygia flooded, save for the couple’s cottage, which had transformed into a temple. With gratitude, Philemon and Baucis became priests of the temple, and when they died, their bodies became a linden and an oak tree beside their old home.

Elsheimer’s composition emphasizes the moment of hospitality offered to the gods by the elderly couple. The scene is set at night inside a peasant home, giving rich details of their modest belongings. The oil lamp on the table shines on the gods’ faces while a secondary light creates a mysterious aura around the home. Philemon, at the door, carries the wine bowl which mysteriously is not depleted, while his wife offers her guests blankets for warmth. Goudt demonstrates his skill in translating a complex painted composition into an engraved print using deep cross-hatched lines and his nuanced wiping of the plate to create his signature chiaroscuro effects.*

The Jupiter and Mercury print was likely made in 1612 just after Goudt left Rome and returned to Utrecht. Around 1620, Goudt’s mental sharpness declined rapidly, and he was declared incompetent in 1625. He died in Utrecht in 1648.