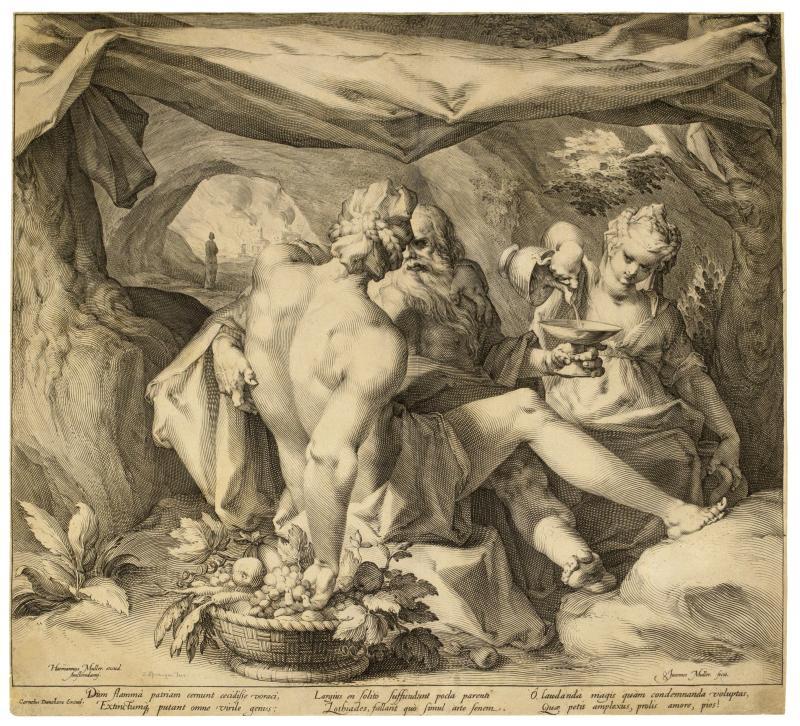 Jan Muller spent the majority of his career in Amsterdam working as both a painter and engraver. He received training from his father, a print publisher and collaborated on a number of works with the famed Dutch engraver, Hendrick Goltzius (1558-1617). Muller worked in Italy and most likely Prague, from 1594 to 1602, and while abroad, he engraved works for notable Mannerists, such as Bartholomeus Spranger (Flemish, 1546-1611) and Adriaen de Vries (Netherland, 1556-1626).

Lot and his Daughters depicts the biblical story from Genesis 19. Lot, the nephew of Abraham settles near Sodom, a sinful city. After an angel comes to an elderly Lot, warning him of Sodom’s impending destruction, Lot flees the city with his wife and two daughters. They escape just as the city is destroyed, but Lot’s wife looks back and is immediately transformed into salt. This leaves only Lot and his two daughters to roam the hills and live in caves. His daughters, believing that all other men had perished, decide that their ailing father is the only man who can bear them children. They decide to intoxicate Lot and lie with him in order to continue their family line. Both daughters become pregnant and bear sons who later become the ancestors of the Ammonites.*

The story of Lot and his daughters has intrigued biblical scholars and artists alike for centuries. Though early depictions are rare, sixteenth-century Northern European artists popularized the subject, because it created a moral dilemma for viewers, challenging them to choose between different interpretations and moral complexities. Lot’s character is both praised and questioned. Although Lot committed incest, the Bible clearly states that he was too drunk to realize what he was doing, so his sin was drunkenness not incest. Furthermore, his daughters were not driven by love but by a desire to perpetuate their family line, believing that all other men had perished. Using symbols associated with both erotic and redemptive metaphors, such as grapes representing the blood of Christ, Muller seems to be forcing the viewer to confront the same tensions scholars have questioned throughout the years. Is this a story on the depravity of humans or the salvation of a people?

Along with creating a complex narrative for the viewer, Muller also showcases his mastering of the nude, emphasizing an exaggerated muscular female body seen from the back. Muller uses an engraving technique of flawlessly even, expanding and shrinking, cross-hatched and parallel lines. The composition is intricate, with curvilinear rhythms that swirl around the characters. In the far distance stands the salt form of Lot’s wife. Lot and his Daughters is one of the few compositions that Muller both designed and engraved. The painting was made in Prague in about 1600 and was signed “C.v Harlem P,” which indicated it was done by Cornelis van Haarlem (Dutch, 1562-1638). It was sold as van Haarlem’s until 1964 when it was reattributed to Muller, who often signed his works with the names of other painters. It is now in a private collection.