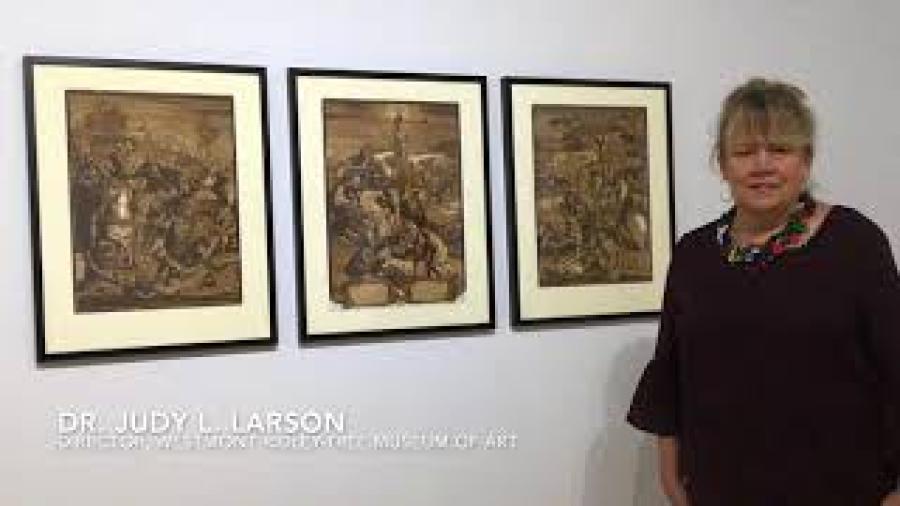 Little is known about John Baptist Jackson’s early life and career in England. In 1725, he moved to Paris, acquainting himself with French printmakers and honing his artistic abilities. He also spent time in Rome and Venice before returning to England, where he remained for the rest of his life. Jackson is highly-regarded for his mastery of woodcuts, producing both chiaroscuro and polychromatic prints. He developed new oil-based inks that worked with overprinting, which was a process that incorporated a wider range of colors. He was also known for his use of layered embossing to highlight areas of his prints.

It was customary for graphic artists, like Jackson, to recreate other artist’s paintings as prints. The Crucifixion was based on the 1565 painting by famed Italian artist Tintoretto, whose proper name was Jacopo Robusti. Tintoretto was an Italian Mannerist artist, born in Venice and known for his dramatic flair and compositional use of deep perspectives. The nickname Tintoretto, meaning “little dyer,” stems from his father's profession as a silk dyer. At a young age, Tintoretto was sent to apprentice for the famed Renaissance artist Titian (Italian, c. 1488-1576) but worked only ten days before Titian sent him home. It is believed Titian saw that Tintoretto would become a great painter but never a proper pupil. The two artists held each other in high esteem, but never worked together again.

The Crucifixion depicts the climax in the biblical story of the Passion of the Christ. The image is a panorama of Golgotha, the site of Christ’s crucifixion. Jesus can be seen in the center panel high above the crowd, radiating light. At the foot of the cross, Mary swoons in agony, comforted by the beloved Saint John and her uncle Joseph of Arimathea. Mary Magdalene stands with her hands raised in alarm. On the left panel, chief priests and members of the Sanhedrin are seated in the landscape; the mounted Centurion points to the crucified Christ. On the right panel, Roman soldiers witness the grisly scene.

Jackson’s use of chiaroscuro, a highly-skilled and time-consuming technique, achieved depth in the composition and added more color. The print is made with four blocks in shades of brown and beige--the lighter colors create the sky and parts of Christ’s halo, while the two darker shades add contours, shadows, and outlines. 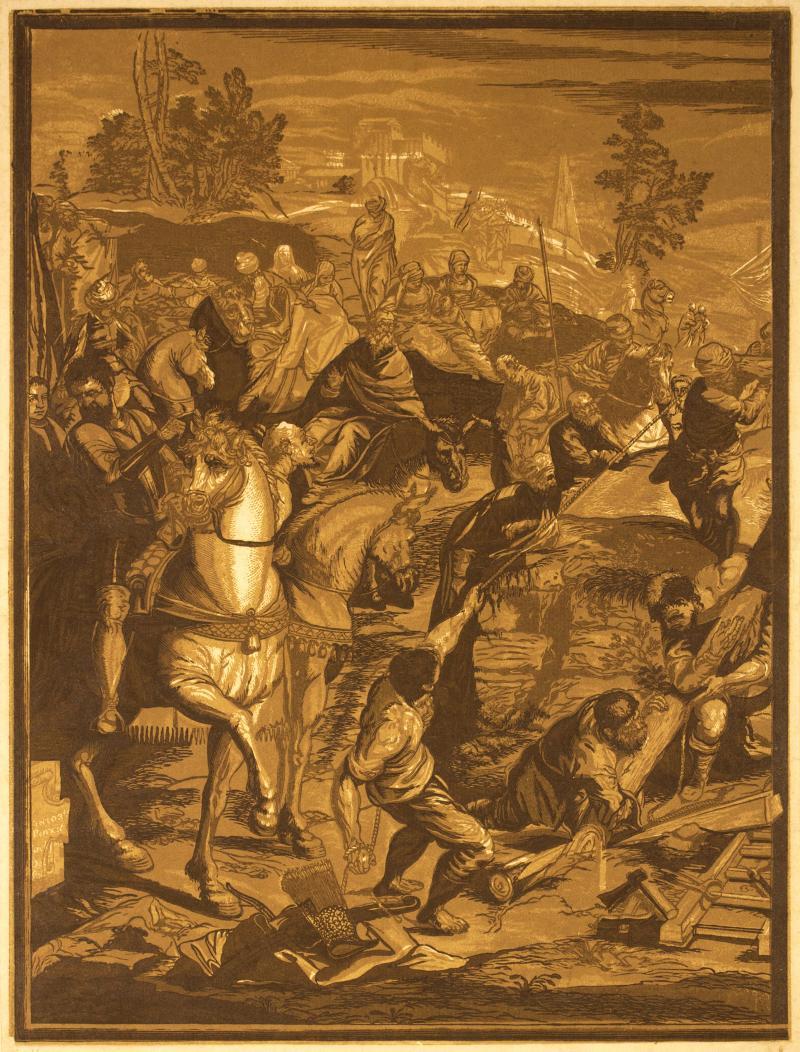 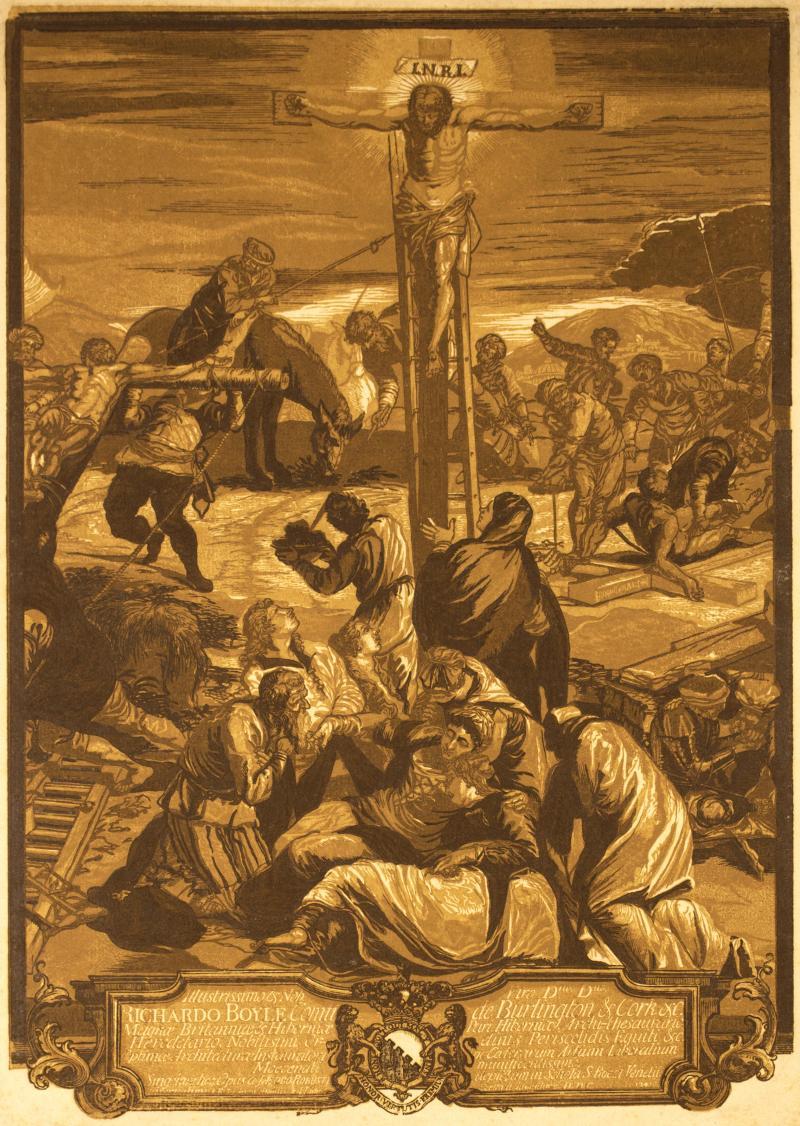 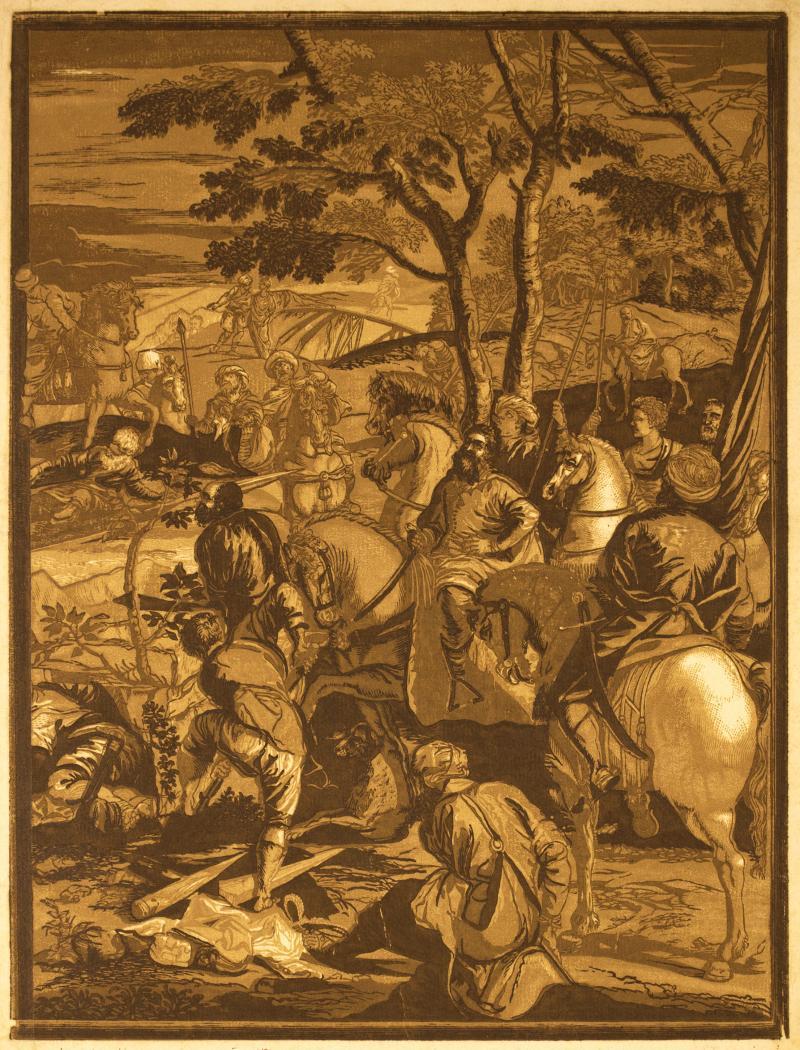