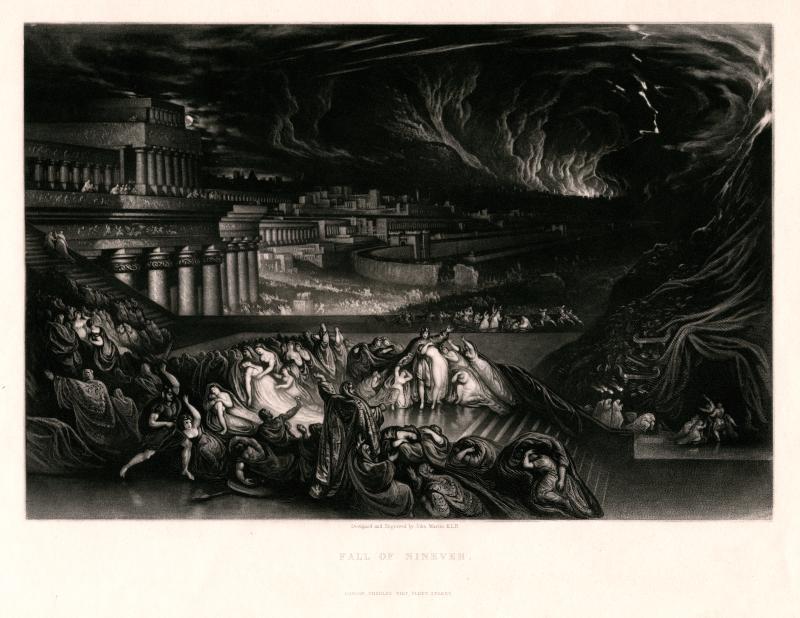 John Martin (British, 1789-1854)
Fall of Nineveh from series Illustrations of the Bible
1835
Etching and mezzotint

John Martin was born just outside the village of Haydon Bridge, England in the late eighteenth century. His father was an out-of-work fencing master, and his mother was a devout Christian, who sought to instill the fear of the Lord in her children. In his early teens, John studied heraldic painting before going to work under Boniface Musso (1758-1810), an Italian enamel painter. Musso trained Martin in portraiture, topography, and enamel-painting, and the two moved to London for more work opportunities. While in London, Martin began working on large oil paintings, often favoring grand biblical themes and using his familiarity with the Northumberland landscape to create works that express the power held by nature.

Martin quickly gained notoriety as the apocalyptic artist of his time. With his exaggerated compositions, he began experimenting with mezzotints, an intaglio process in which the artist works from dark to light, starting with a deeply rocked black background and then adding in highlights by smoothing down the roughed-up surface of the plate. Mezzotints had become popular in England in the mid-nineteenth century, and given the visual melodrama of Martin’s art, they were the most appropriate medium to deliver his theatricality.

Encouraged by the success of his 1827 illustrations of John Milton’s Paradise Lost, Martin commenced his next and, perhaps, most ambitious endeavor, Illustrations of the Bible. Beginning in 1831, he initially planned to create forty illustrations of the Old and New Testament. The prints would be issued in installments of two illustrations with text on the subject. Unfortunately, the series was cut short after twenty mezzotints, due in part to complications with British copyright laws. Imitations were sold for far less than what Martin was charging, and by 1835, on the verge of bankruptcy, Martin sold the twenty plates to the publisher Charles Tilt. Tilt produced a bound edition of the entire series, which includes illustrations of Old Testament stories, such as Creation, Adam and Eve Hearing the Judgment, Moses and the Burning Bush, and many others. Fall of Nineveh was the last illustration Martin made in the series.

The Fall of Nineveh depicts the scriptural prophecy in the Old Testament book of Nahum foretelling of the destruction of Nineveh due to the city’s depravity.* Nineveh was rumored to be magnificent, but it was also said to be filled with liars and robbers. Around 612 BC, catastrophic floods caused the city’s river to rise, which tore down the walls of the city. Enemies were then able to enter and destroy the city. Invading armies can be seen in the background of the print, entering the city through the fallen walls. In the foreground, the Ninevites scatter as their king, Sardanapalus orders men to construct a large funeral pyre on which he, with his concubines and treasures, would burn to death. The cataclysmic devastation is apparent. There is no absolution.

Martin recovered from his near bankruptcy, exhibiting many more works during the 1840s. In his later years, he concentrated on a trilogy of large paintings inspired by the Book of Revelation. Soon after he completed the trilogy, Martin had a stroke, paralyzing his right side. He died the following year.

*The Lord has given a command concerning you, Nineveh: ‘You will have no descendants to bear your name. I will destroy the images and idols that are in the temple of your gods. I will prepare your grave, for you are vile.’  Nahum 1:14 (NIV).