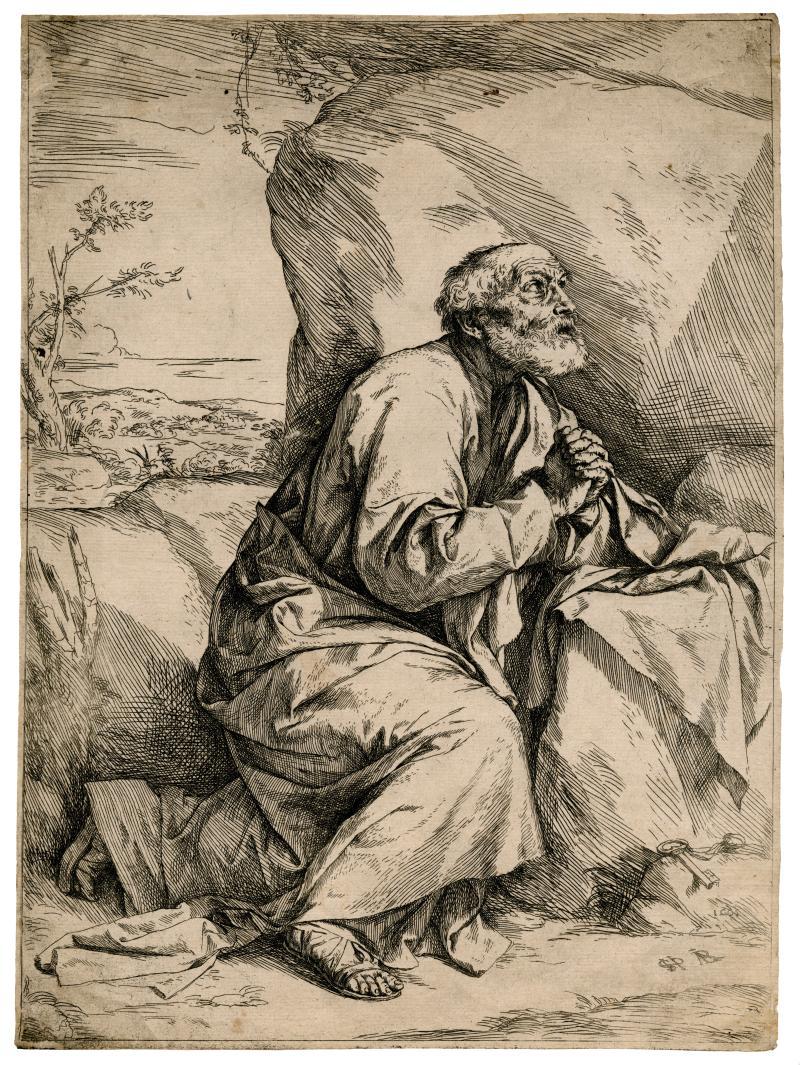 In 1591, Jusepe de Ribera was born in Játiva, Spain. Though little is known about his early training, scholars presume that he studied painting in Valencia. Ribera came to Italy around 1608. His first recorded commission was in 1611 for a painting titled, Saint Martin and the Beggar, which he created for the Church of San Prospero. Two years later, Ribera’s name appears as a member of the Academia de San Luca in Rome. Although he was Spanish-born, Ribera’s drawing technique shows the influence of Italian artists, especially evident in his interpretation of the human form. Aspects of naturalism are present in his work, but he also displays his interest in grand, monumental figures, as well as gritty, dramatic subject matter.

In 1616, Ribera resided in Naples and married the daughter of Neapolitan painter, Giovanni Bernardino Azzolini (c. 1572–1645). Aside from a few brief trips to Rome, Ribera remained in Naples for the rest of his life. During the 1620s, most of his works were commissioned paintings for Spanish churches or for private collections. Only a few known etchings were done by Ribera at this time, including The Penitence of St. Peter. Though prints were not his focus, the distribution of these etchings established his fame throughout Italy and Northern Europe.

Ribera explored the subject of Peter’s penitence throughout his career.* The scene in The Penitence of St. Peter depicts the moment right after Peter (identified by his bald head and the Key of Heaven sitting on a rock) betrays Jesus by denying him three times. He regrets his actions and seeks forgiveness for what he has done. He sits in a craggy landscape, crouching behind a rock as if to hide, choosing a quiet place where he can openly express his remorse. Clasping his hands, Peter looks up, visibly in anguish. He has humbled himself, seeking the absolution that he is later granted by the risen Lord.

Ribera often used both etching and engraving in a single print, because it enabled him to convey a wider variety of emotions.** Ribera’s figure of Peter is pushed close to the picture plane and dominates the composition. The soft landscape in the background sets the scene in the wilderness, where Peter is alone to contemplate and grieve for his sin. The monumental size of the figure and the details – his sandals, the key, his flowing robe – expose the inspiration Ribera took from Italian artists. The emotional distress on Peter’s face is heightened by deep, cross-hatched shadows on his neck and cheek in contrast to light that hits his countenance and beard.

Later in life, Ribera suffered a chronic illness, yet he continued working. He completed several large paintings in Naples in his last few years and sent numerous works back to Spain. He died in 1652 in Naples.

*A drawing of the Penitence of St. Peter, 1617 -18 in pen and black ink, with red wash tones, in the Fondation Custodia, Collection Frits Lugt, Paris, may be the study for Ribera’s etching and engraving. The Metropolitan Museum in New York owns the painting, The Tears of St. Peter from 1612. A painting from the 1620s shows Peter in a half-length portrait, fingers interwoven in prayer, eyes looking heavenward in the collection of the Hermitage. A 1630s painting titled The Penitent Saint Peter by Ribera is in the collection of the Museo Soumaya in Mexico City.
**Art historian, Gabriele Finaldi, explores Ribera’s skill as both an engraver and an etcher further in: Finaldi, Gabriele. “A Note on Ribera as an Engraver.” Print Quarterly, vol. 13, no. 3, 1996, 291.