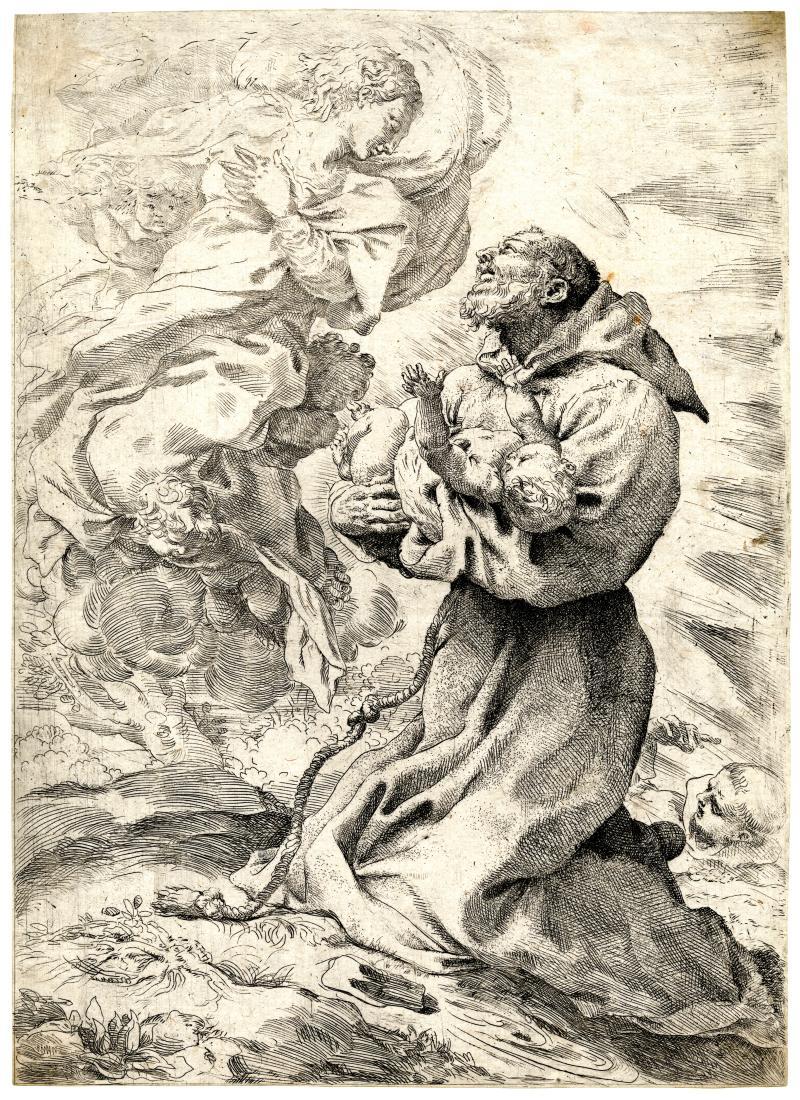 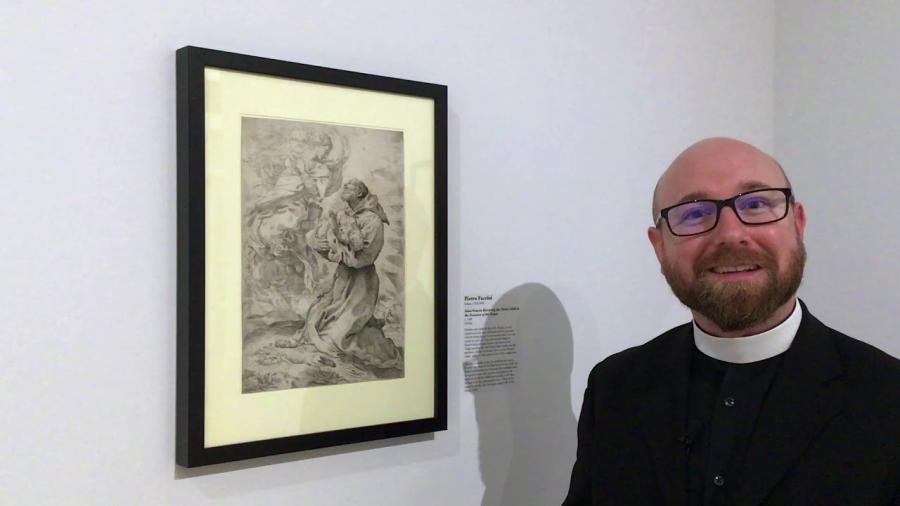 Pietro Faccini was a sixteenth-century Italian painter who bridged the styles of Mannerism and Baroque, focusing on the emotional and spiritual turbulence of his subjects. His artistic career was brief, as he took up painting around the age of thirty and died ten years later. He produced few prints during his short career, working primarily on drawings with pen and ink, watercolor, and red chalk. Saint Francis Receiving the Christ Child in the Presence of the Virgin is likely the only etching designed and made by Faccini’s hand.

Saint Francis is one of the most venerated saints in the Catholic Church’s history, as well as the founder of the Franciscan Order. Born into a wealthy family in Assisi around in 1181, Francis was imprisoned as a soldier but after his release, found solace in the Church, renouncing his family’s resources and declaring his dependence on God alone. During the Protestant Reformation, Saint Francis became a popular subject for the Catholic Church, because his emotional connection to God demonstrated that all people had equal access to the faith.

The scene illustrated in Saint Francis Receiving the Christ Child in the Presence of the Virgin has left many to wonder what story Faccini is depicting. It cannot be verified in any early documents on Saint Francis, though there are similarities to a passage in Luke Wadding’s history of the Franciscan Order from 1625. Wadding recounts a time when a friar “followed Francis into a deserted wood and witnessed the Virgin handing the Christ Child to him.”* A thirteenth-century literary publication titled, The Little Flowers of St. Francis records a similar encounter with the Virgin and Christ Child, but it was not Francis’ vision, rather, it happened to Brother Conrad of Offida, a companion to Francis. The stories, perhaps, conflated over time, with Francis becoming the recipient of the miracle.**

Another possibility is that Faccini depicts Francis’ recreation of the Nativity in Greccio, Italy. Francis commissioned a crèche modeled after Bethlehem, including a manger and an image of the Christ Child, to be built near the church’s altar. At the Christmas Eve midnight mass, Francis preached on the Christmas story. Overcome with emotion, he picked up the figure of the Christ Child from the crèche and held it up for the congregation to see. Those in the crowd, swear they saw the image come to life as the Christ Child. Whether the etching was meant to depict a more private moment in the woods with a friar or the public event at the Greccio crèche, it was a way for viewers to connect not only with the maternal love and sacrifice provided by Mary and the Christ Child but also with the blessings given to Francis because of his devotion.

The composition of the etching is divided into two triangles–the Virgin occupies the upper portion, surrounded by clouds and adoring putti. Francis kneels in the lower half, his tender eyes fixed on the Virgin while holding a squirming Infant Christ. The print is lightly etched with delicate, thin lines creating an ethereal atmosphere, befitting Francis’ heavenly vision.