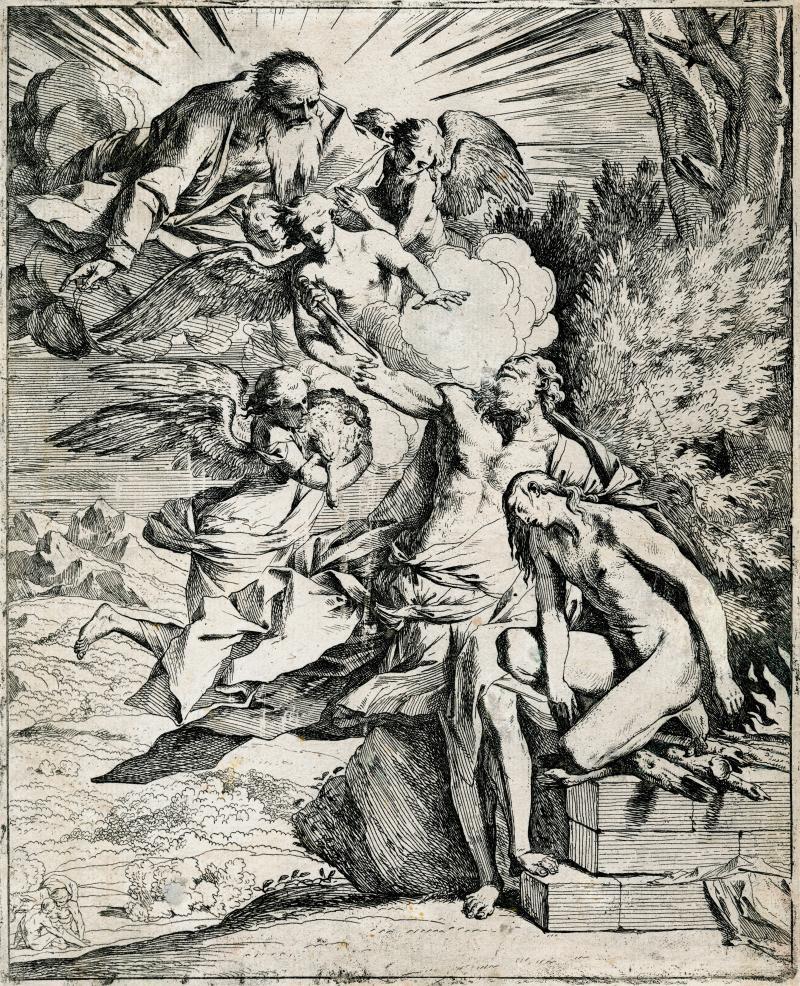 Because of his birthplace of Lucca, Italy, Pietro Testa was given the moniker: Il Lucchesino. There is little known about his early life and training, until his move to Rome, where he met the German art historian Joachim von Sandrart. The art historian gave Testa a job drawing* for the Galleria Giustiniani, -- a project involving numerous artists engraving images of Vincenzo Giustiniani’s collection of antiquities. Testa had a penchant for the ostentatious, creating large allegorical prints, which he filled with elaborate figures. He longed to be a painter, but received few commissions. Though a skillful etcher, he created his art for himself, focusing on his own taste, independent from the influences of the world around him. Testa’s autonomy isolated him from the art world, and consequently, he not only remained in poverty but soon lost contact with the outside world.

Testa’s subjects ranged from fantastical scenes, to Greek mythology, to biblical imagery, demonstrating his aptitude and curiosity in diverse themes. The Sacrifice of Isaac by Abraham, is an Old Testament story,** where God commanded Abraham to offer his only son, Isaac, as a sacrifice to the Lord. Abraham leaves with Isaac, two servants, and a donkey. While his two servants and the donkey stay back, Abraham continues to the spot alone with Isaac. After building the altar, Abraham binds Isaac’s feet and puts his son atop the altar. With the knife in his hand, preparing to sacrifice his son, Abraham hears the Lord tell him to not lay a hand on Isaac, because Abraham has demonstrated his fear of the Lord. Noticing a ram caught in a bush, Abraham takes the animal and sacrifices it instead of his son, praising the Lord for His provision.

In Testa’s etching, he creates a dramatic and elaborate composition, which spirals upwards, taking the viewer’s attention first to a nude, kneeling Isaac on an altar, then to Abraham whose arm is pulled back by an angel, while another angel to the left provides the sacrificial ram. Abraham’s face meets the gaze of God Almighty, hovering in the clouds above, and relief washes over Abraham as he realizes he has been spared this grisly task. Testa created careful and detailed studies for his etchings, but the prints often reveal his lack of concern for thorough polishing and cleaning of the plate with broken lines and inked scratches throughout.***

Studies of the work indicate that Testa was experimenting with textures and depth. In the final etching, the mountains in the background and the drapery on the figures show the sense of depth and texture he had been practicing in his sketches.

Much has been written about Testa’s death, as he had become critical of others, and was alienated and bitter. This tension along with his severe shyness and melancholic existence culminated in deep personal struggles. At age thirty-six, his body was found in the Tiber River in Rome. The cause of his death has been contested. Though, it is believed by many historians that Testa committed suicide, his church burial calls that theory into question.*"*

* Although it is unclear in historical text, it seems that Testa may have made drawings for others to engrave for the Galleria Giustiniani project.
**See Genesis 22:1-14.
***For more information, see: Cropper, Elizabeth, and Charles Dempsey, Pietro Testa, 1612-1650: Prints and Drawings (Philadelphia, Pa: Philadelphia Museum of Art, 1988) 149.
*"*Sandrart did not believe it was suicide and claimed that “when a stormy wind blew the artist’s hat into the Tiber, he tried to recover it and fell in with no one there to help him.” In Cropper & Dempsey, xii