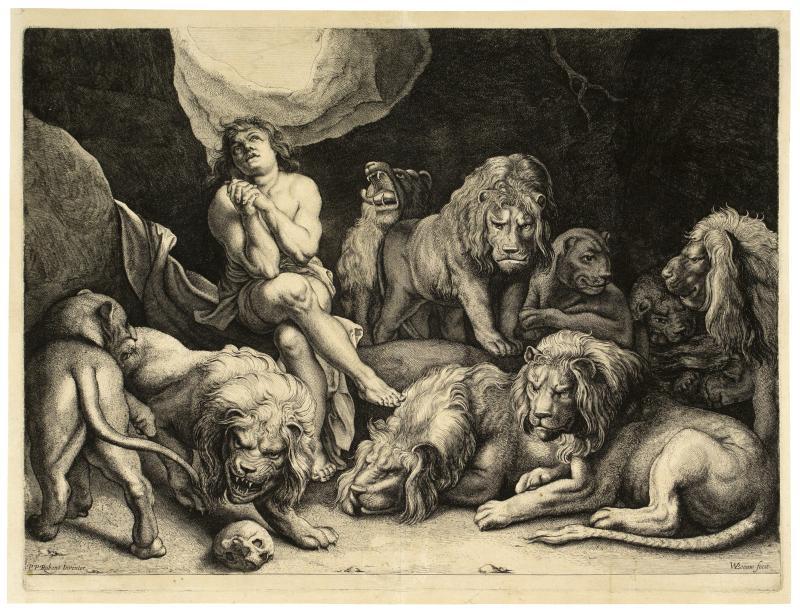 Willem van der Leeuw was a little-known seventeenth-century Flemish artist, whose reputation rests on his work as a reproductive engraver for the noteworthy Flemish artist, Peter Paul Rubens (1577-1640). Van der Leeuw skillfully translated many of Rubens paintings into prints, capturing Rubens’ rhythmic compositions and dramatic use of chiaroscuro.

Rubens was a devout Roman Catholic and depicted many biblical scenes in his works. He painted Daniel and the Lion’s Den between 1614 and 1616 and intended it to be a showpiece in his Antwerp studio. Usually, artists as renowned as Rubens did not have the time to create large canvases by themselves, so they hired assistants to complete the background work or other compositional elements as directed by the master. Daniel in the Lion’s Den, however, is believed to have been painted entirely by Rubens. Wanting to add a sense of realism to the scene, Rubens studied the Barbary Lion at the Royal Menagerie in Brussels making extensive sketches of both male and female lions.

Daniel and the Lion’s Den depicts the Old Testament story of Daniel,* a Jew who had risen to be a high-level administrator for the Persian King Darius. The King favored Daniel and planned to promote him to be administrator over the kingdom, but others were jealous of Daniel. They tricked King Darius into decreeing that all who prayed to a person or god other than Darius, would be thrown into the lion's den. Daniel was seen praying to his God, and King Darius was forced to throw him into the lion’s den. Daniel prayed fervently to God throughout the night, and the next morning, King Darius checked on Daniel, finding him alive due to his faith in God.

Rubens’ painting** tells this dramatic story of faith by emphasizing powerful details. Daniel’s face reveals both his fear and his deep faith -- even when surrounded by lions. The skull in the foreground is evidence that these lions had previously done their gruesome job, while also symbolizing Golgotha, the location of Jesus’ crucifixion. The oculus to the den is positioned above Daniel’s head, as though it were a halo and symbol of his ardent faith. Theologians interpret Daniel as an archetype to Jesus Christ, who was also persecuted, but conquered death through His resurrection from the dead.

Van der Leeuw copied directly from Rubens’ painting, which resulted in a mirror image. While Rubens’ had the benefit of color to underscore emotion in Daniel’s story, van der Leeuw translated those feelings using only black and white. He changed small details, like removing the arm and leg bones seen in the painting and surrounding Daniel in light, creating a stark contrast with the dark background. The fabric covering Daniel’s body in the painting was red, symbolic of blood; in the engraving, the fabric is white, a possible reference to the shroud of Christ.

*See Daniel 6:1-28.
**Currently in the collection of the National Gallery of Art in Washington, D.C.