Westmont Magazine The Blessing and Beauty of Adoption 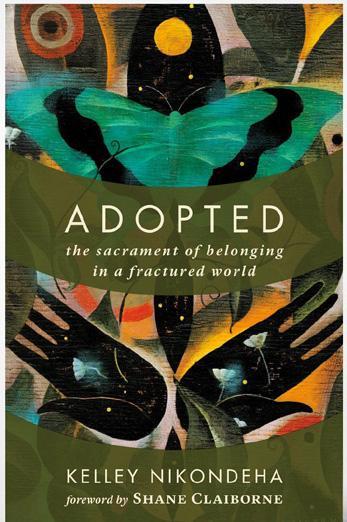 An adopted daughter, Kelley Johnson Nikondeha ’91 and her husband, Claude, have adopted two children born in Burundi, her adopted country. Adoption has shaped her life profoundly, and she has studied the Scriptures and thought deeply to grasp its full meaning. In a beautifully written book, “Adopted: The Sacrament of Belonging in a Fractured World” (Eerdmans, 2017), she shares her insights and a central truth in her life: Anyone can be our family if we let them. Nothing she had read expressed her experience with adoption, so she decided to expand the conversation.

“Adopted” has won awards from Christianity Today (Award of Merit for Christian Living/ Discipleship) and the Academy of Parish Clergy (Top Ten Books for Parish Ministry).

A communication studies major, Kelley describes rhetoric with Greg Spencer as a master class in choosing words wisely and living well. The year she directed Spring Sing, she discovered an affinity for putting teams together and empowering them, a skill she has since developed. After graduating, she stayed at Westmont, worked in the housing office and worshipped at Christ the King Episcopal Church. A desire to deepen her faith led her to Fuller Theological Seminary to become the best informed volunteer at her church, and she earned a Master of Divinity in 1999. The year before, she met her husband when he came to Christ the King to discuss reconciliation. He’d grown up in poverty, the son of a pastor in Burundi, and worked hard to earn a scholarship and graduate with a degree in journalism from the University of Brest in France. Claude and Kelley got married in 2002 and lived in Pasadena while civil war ravaged his native land. She worked as a major gifts officer in the development office at Fuller, and he joined the Salvation Army as director of diversity in the Long Beach office. Then Claude felt called to return home to help his country recover from the devastating conflict.

Claude and Kelley began pursuing two goals: promoting reconciliation in a war-weary country and doing development work to help marginalized tribes. To achieve the first, they started Amahoro Africa to address African problems with African thinkers and practitioners. “We wanted to get people together and have a conversation,” Kelley says. Now in its 11th year, the initiative gives thinkers like Kelley valuable information and practical experience and practitioners like Claude compelling language and ideas to describe their work.

The couple founded NGO Communities of Hope initially to work with the Batwa tribe, the smallest most marginalized in Burundi. They started with 30 families and now serve more than 3,300 from a variety of tribes, helping them improve their agricultural production and providing education for their children. The governor of Bubanza gave land to these families, and Communities of Hope has drilled wells, developed schools and built the Strong Start Clinic, an 8,000-square-foot medical facility focused on the first 1,000 days of life. To support their development work, Claude established a bank with eight branches that can lend more money than a typical microfinance initiative. Kelley does the theological work of their NGO, research and writing, and Claude oversees the projects.

The family splits their time between Bujumbura, the capital of Burundi, and Surprise, Arizona. “I never thought I would live outside the country or do development work,” Kelley says. “I got a great foundation for things I never expected, and my experiences have equipped me to tell stories about our lives and work.”