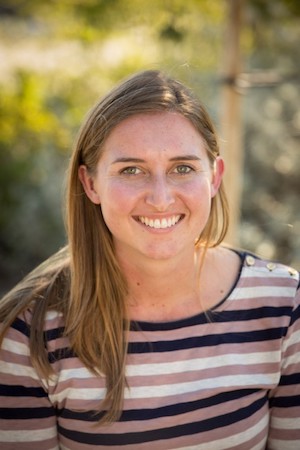 Expecting a career in conservation, Lindsey Connolly ’08 majored in biology and attended the Creation Care semester in New Zealand. After graduating, she volunteered for two months in Chile, restoring ranch land for a national park. She worked part time at Ty Warner Sea Center in Santa Barbara to educate visitors about the natural world, and she coached cross country and track and field at Westmont.

Then her life veered in an unexpected direction. Rebecca Smith, who grew up with Lindsey in Carpinteria, went on a two-week mission to Haiti in 2008—on a whim. She hated it and decided to leave early. On her way to the airport, the driver stopped at an orphanage. When Rebecca walked into a room of silent children too tired and listless to cry, she changed her mind. She stayed the full time and felt compelled to help Haitian orphans. Back in Carpinteria, Rebecca recruited Lindsey, who knew a little about the country’s environmental issues, to join an exploratory trip to Haiti. “I was shocked she went there,” Lindsey says. “It’s not the sort of thing she’d do.”

The two women began researching Haiti to learn how to establish an orphanage there. They wrote to every non-profit they could find, asking for advice and information. Jacky Poteau, president of Fatem, which supports education in Haiti, responded. “Your idea is great, and you’re enthusiastic,” he said. “But don’t start something in Port au Prince; go where there is land and open space.” He suggested Mirebalais, a rural area where he grew up.

Lindsey and Rebecca signed up with a Minnesota church group to travel to Haiti in January 2009. While there, they met Poteau and visited Mirebalais. The two friends explained their plans to local residents, who suggested they start a school instead because most families couldn’t afford to send their children to school. That seemed less overwhelming and more achievable, so Lindsey and Rebecca set to work. Eventually, they signed a long-term lease on a building and hired both an administrator to run the school and a principal to recruit teachers. The first classes opened in 2010. Today, 180 students attend kindergarten through sixth grade.

To fund the school, the women created a non-profit organization, Destined for Grace, and started holding rummage sales. These succeeded so well they have opened three thrift stores in Carpinteria, Santa Barbara and Goleta. Rebecca’s husband, Tyron Smith ’00, manages the Goleta location, which is the largest. Lindsey and Rebecca work in the stores, managing the business and doing everything from sorting clothes to cleaning up and picking up donations. They employ 15 people, and the profits support the school. Student sponsors also contribute $125 per year.

Lindsey’s family, friends and church, Carpinteria Community, as well as many volunteers, help by doing short-term projects such as painting and building chalk boards and chicken coops. Lindsey and Rebecca visit Haiti several times a year, leaving the day-to-day work to the staff. “It was always our intent to employ local teachers,” Lindsey says. “We wanted to help the community economically as well as educate children.”

Lindsey still coaches at Westmont but quit her job at the sea center. She now considers conservation a hobby. “When we thought about what we wanted to do with our lives, we decided to work for ourselves and do something that benefits others,” she says. “We’re investing our lives in this ministry.”