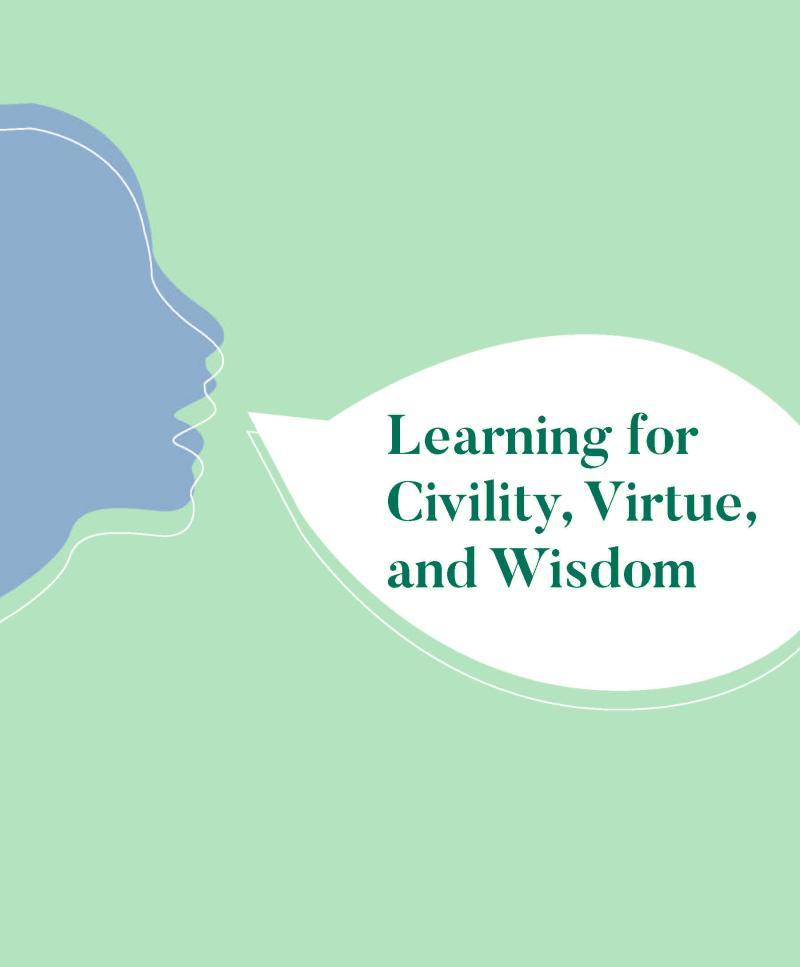 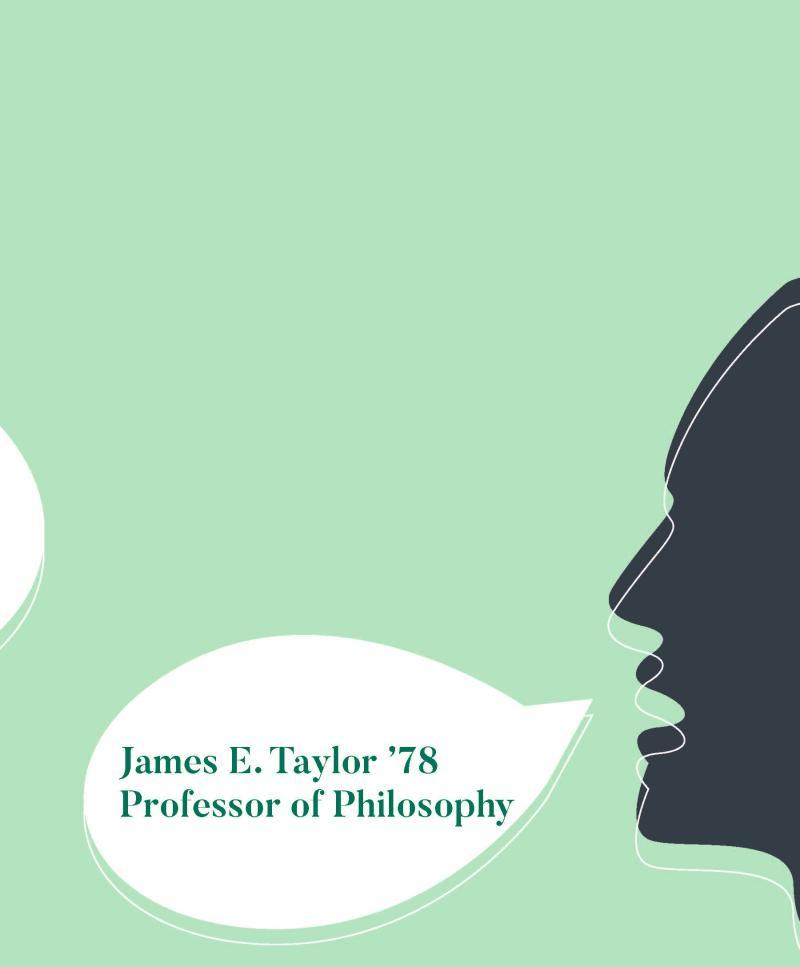 Can a philosophy class help students become better people? Can a Christian liberal arts education contribute to the formation of good citizens? I address these questions in my teaching and writing, and I hope people who meet my students and read my book will agree with me in answering “yes” to both. Two current developments in our society highlight the importance of these pedagogical goals: a decline in civility and a deficiency of intellectual virtue.

PROBLEM NO. 1: A DECLINE IN CIVILITY

Public discourse in the United States has become increasingly uncivil. Our elected officials on both sides of the aisle demonstrate a growing disrespect for their opponents. The rest of us often act no better. Conservatives and liberals shout at—or refuse to talk to—each other. Many online comment sections contain shocking and sickening insults and accusations. Unfortunately, we members of the Christian community frequently contribute to the rudeness— both in our conversations with non-Christians and in our discussions with each other.

Our rising discourtesy raises at least two concerns: one ethical and the other practical.

The ethical concern is that incivility is unloving. Genuine love for another human being requires treating him or her with the respect due to a fellow creature bearing God’s image. When we disrespect people, we fail to love them as we should. And when our love for others is deficient, we violate the Second Great Commandment to love our neighbor as we love ourselves. We also fall short of fully observing the First Great Commandment to love God with all we’ve got—since incivility involves dishonoring one of God’s beloved human creations.

The practical concern is that incivility is polarizing. As a result of our rising discourtesy, we’re becoming more divided from each other. Our mounting antagonism makes it more difficult for us to work together to find solutions to our common problems. Our current leaders’ ineffective feuding about the best way to improve our healthcare and immigration systems illustrates the problem. Sadly, Christians also practice incivility. Divisions within the Church create an obstacle to fulfilling the Great Commission and furthering God’s Kingdom.

PROBLEM NO. 2: A DEFICIENCY OF INTELLECTUAL VIRTUE

But our problem extends beyond incivility. We also lack intellectual virtue. Many among us possess knowledge, intelligence, rationality, and skill at critical thinking, but we need more than these qualities. In our pursuit of truth far fewer display wisdom, discernment, charity, and willingness to see things from their opponents’ point of view. All of us could become better people—not just morally but also intellectually.

Our lack of intellectual virtue becomes problematic for at least two reasons—again, one moral and the other practical.

A deficit of intellectual virtue involves a failure to make the most of our God-given intellectual endowments. Good stewardship of our faculties of perception, memory, reflection, insight, and reasoning requires us to work hard to habitually make excellent use of these resources in our quest for knowledge. Excellence in using these tools requires the exercise of virtues. Examples include being disposed to love knowledge and also to:

Practically, without intellectual virtue, the knowledge most worth possessing and the hardest to get will likely elude our grasp. An example is knowing the causes and probable consequences of climate change. Many knowledgeable, intelligent, and rational people think recent human activities contribute to global warming, and many knowledgeable, intelligent, and rational people deny this claim. These intellectual qualities by themselves will not help us reach a consensus about the truth in this area—one that will assist us in making wise policy decisions. We also need intellectual virtues, including a sufficiently strong disposition to love the truth—a disposition that will enable us to humbly admit we might be wrong and to courageously risk the disapproval of our side, team, party, faction, or tribe if we should decide to change our mind.

We encounter insufficient civility in our public discourse and inadequate virtue in our pursuit of truth, shortcomings regrettable for both moral and practical reasons. Can we reverse these trends? Christian liberal arts institutions like Westmont can make a positive difference by providing students with both spiritual and academic resources conducive to the personal transformation needed to become both civil and intellectually virtuous. As a Westmont professor, I’ve looked for ways to make contributions to this effort. Some results have come in the form of a new course and a new book.

In fall 2013, I applied for and received a course-development grant from the Biola Center for Christian Thought on the topic of intellectual virtue and civil discourse. Since that time, I’ve taught the course twice to a total of 17 students. I found these experiences valuable because we focused on becoming better people—intellectually, morally, and spiritually—rather than on just acquiring knowledge and skills, as good as these things are.

Student testimonies revealed their appreciation for this emphasis and their commitment to continued personal growth: “A wonderful and thought-provoking experience.” “Open, honest, and civil discussion.” “I think I have grown in virtue so much, directly as a result of the course.” “Gave me examples of intellectual virtues like charity and courage that have helped me both in my philosophical endeavors and interactions with others in professional and personal contexts.”

The course is divided into three sections: Principles, Persons, and Practice. Studying principles helps us understand intellectual virtue and civil discourse. We think about them from a theoretical philosophical standpoint. The Persons unit features real and fictional examples of intellectually virtuous people to inspire students and give them models to emulate. The Practice part offers many occasions to exercise the intellectual virtues and to practice civility. These activities consist in conversations about important issues that currently divide both our society and the Christian church.

Fortunately a number of valuable resources exist today for a course like this.

We turned to the Bible, to history, to literature, and to the sciences for examples of real and fictional people— Christians and non-Christians—who manifest specific intellectual virtues.

Of course each person possesses other virtues, and none of them is perfect. But all of them are worthy of imitation in one way or another, and learning about them motivated the students to want to be like them.

Once we had discussed the principles and admired the persons, we tried to practice conversing with each other in virtuous and civil ways. I chose the most consequential and divisive contemporary issues I could think of for our dialogues: abortion, gun control, immigration, racial profiling, gay marriage, and climate change—among other hot-button topics. I also took care to frame these conversations to maximize cooperation and minimize competition. When students were assigned a position on an issue (pro or con), I told them that their responsibility was to “steward” that point of view by making the best case for it they could—to exercise the intellectual virtues. But I also told them not to think of their interlocutor as an opponent with whom they would be debating for the purpose of winning. Rather, I invited the students stewarding alternative solutions to see themselves as partners with whom they would be conversing for the sake of discovering the truth. I encouraged them to look for common ground and to be willing to acknowledge when their partner made a good point—even to concede a claim when appropriate. We all agreed that this collaborative mindset made the interactions more civil than they would have been without it—especially when students’ real views were diametrically opposed and their contributions were made with increasing emotion.

The difficulty of thinking well and talking respectfully about key controversial questions became clear to me and my students throughout the course. Wisdom is required. Fortunately, my students take other classes besides Intellectual Virtue and Civil Discourse. During their time at Westmont, they pursue a course of study that includes both general and specialized learning. The former lies at the heart of a Christian liberal arts education, which I characterize as learning for wisdom.

LEARNING FOR WISDOM: CHRISTIAN EDUCATION AND THE GOOD LIFE

I started writing Learning for Wisdom (Abilene Christian University Press, 2017) 20 years ago but set it aside when another book project took priority. The lengthy gap between the initial conception and final publication proved to be a blessing. I took in a lot about learning, wisdom, and learning for wisdom during that period of time. In short, I was older and hopefully wiser when I completed it. The book has three sections: Learning, Wisdom, and Learning for Wisdom.

The introduction and the first section (Learning) describes the purpose of Christian liberal (or general) learning as the cultivation of wisdom for living in the Kingdom of God. I then build on a broad conception of learning and a diverse but unified liberal arts tradition to articulate a vision of Christian general learning aimed at acquiring a Christian mind and godly heart for loving service. By appealing to the Augustinian principle of faith seeking understanding, I address and attempt to alleviate the concern that the “Jerusalem” of Christian faith should avoid the “Athens” of general learning.

The second section (Wisdom) draws on ancient Greek philosophy, and especially Aristotle, to distinguish three kinds of wisdom: theoretical, practical, and productive— wisdom about what’s true, what’s good, and what’s beautiful. Then I locate these three intellectual virtues in the Old and New Testaments and in the Confucian and Buddhist traditions of ancient Asian philosophy. In the former case, the emphasis is on practical wisdom based on fearing the Lord. In the latter case, the focus is on openness to wisdom from non-biblical and non-Western traditions. I affirm the value of human wisdom in various traditions as long as we subordinate it to divine wisdom as revealed in Scripture.

The third section (Learning for Wisdom) explains how the different Christian liberal arts disciplines can facilitate learning that leads to the three kinds of wisdom: wisdom about what to believe (involving reflection); wisdom about how to live (leading to action); and wisdom about what to make (facilitating creation). Finally, I encourage my readers to engage in the process of learning for wisdom by the integrated practice of both academic and spiritual disciplines.

Learning for each of these kinds of wisdom (theoretical, practical, and productive) can equip Christian students for wise, virtuous, and civil participation in our public life.

Learning for theoretical wisdom can put them in a better position to understand:

Learning for practical wisdom can assist them in:

Finally, learning for productive wisdom can enable students to create things that enhance our life together, including (among many other things):

As I reflect on the experience of teaching this course and writing the book, I’m aware of the intellectual, moral, and spiritual resources available to students at Christian liberal arts colleges like Westmont, which encourages me. These resources can help Christian students grow in their desire and capacity to become people who can love God and others and engage in civil collaboration. These assets can also assist students in their life-long project of cultivating intellectual virtue—thereby being good stewards of the intellectual resources God gave them. As a result, they’ll be better able to acquire the knowledge we need to solve our most difficult social and political problems—especially when obtaining it requires such virtues as humility, courage, charity, and wisdom.