Russell Howell, who has taught mathematics at Westmont for 35 years, was installed as the Kathleen Smith professor of the natural and behavioral sciences Oct. 18. After the full-regalia ceremony, he spoke on “Does Mathematics Require Faith? Does Faith Require Mathematics?”

“It seems that the obvious answer to both questions is a resounding no,” Howell says. “It may come as no surprise, then, that my response is an enthusiastic yes.”

Howell is a contributor and co-editor of a book, “Mathematics Through the Eyes of Faith,” which examines the connections between math and faith. He also co-authored a popular textbook, “Complex Analysis for Mathematics and Engineering,” now in its sixth edition.

“I’m thankful to be part of a team of fellow faculty members and staff who collectively provide our students not only with a first-rate education, but also help guide and direct them as they map out their calling as Christians while at Westmont and afterwards,” Howell says. 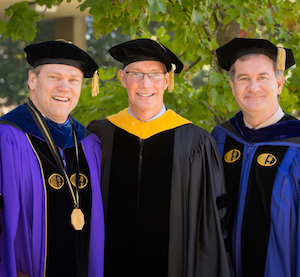 Provost Mark Sargent describes Howell as both rigorous and reasonable. “He has high standards, asks excellent questions and yet is always willing to look for solutions that serve the greater good,” he says. “As a scholar, he is clearly distinguished for thinking in interdisciplinary ways about his field, often reaching into philosophy, theology, history and other disciplines to discuss vital concepts. He has devoted much of his life to serving students and enriching the intellectual ethos of Westmont.”

Kathleen Smith, a longtime neighbor of the college, left $1.7 million in her will for Westmont when she died in 1988. The chair includes a stipend for research.