Westmont Magazine A Passion for Politics and Public Service 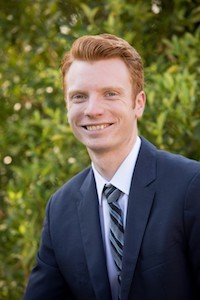 David Dry ’14 has been involved in student government since the third grade. In elementary school at Rancho Palos Verdes, he penned a persuasive essay about our nation’s immigration policy while others wrote about the Dodgers or the best car to own.

“I’ve always hoped to work for the government,” says the political science major. “I have a passion for public service and giving back to the state and country. My grandpa served in Korea, and my family has always emphasized the importance of politics and being an informed voter.”

Both David’s parents, Ed and Lorinda, graduated from Westmont in 1981. “I wanted to go as far away as possible but decided I would at least look at it,” he says. “I fell in love with Westmont on the first Preview Day and saw the school with new eyes.”

Vicente Fox, the former president of Mexico, spoke in chapel, and David heard political science students outside the gym dissecting and commenting on the talk, which impressed him.

David directed a Spring Sing skit his first year. “It was a challenge to manage 60 freshman men and choreograph the dancing,” he says. “It was mayhem and a lot of sleepless nights, but we won third place.”

His sophomore year, David fell in love with learning during Europe Semester. “Studying in Israel and Palestine, the Bible was our textbook,” he says. “I began to engage the subject matter, soaking in the cultures through relationships and friendships with people from many walks of life.”

David served as a resident assistant his junior year. Living and working in Van Kampen Hall with mostly older seniors humbled him. “I relied on God to put me in situations where he could best use me and plant the seed,” he says. “It’s really God that changes somebody’s life and puts them on the right track.”

In February 2013, David and four other political science students presented a paper, “Just War, National Interests, and the Iraq War,” at the 12th annual Conversation on the Liberal Arts, “War and Peace as Liberal Arts.” “It started out as a regular class assignment, but we took it seriously and wanted to get it published with the Gaede Institute for the Liberal Arts,” he says. They researched every speech given by President George W. Bush before the invasion of Iraq in 2003. If he mentioned Iraq, they coded it, broke down the intricate sentences and identified each one as national interest rhetoric or just war theory rhetoric.

During the summer of 2013, David worked as an intern at the Washington, D.C., office of U.S. Representative Darrell Issa (R-CA 49th District), who chairs the House Oversight and Government Reform Committee. David flew to Washington during spring break, handed out resumes and introduced himself to dozens of politicians. “A lot of people were impressed that I flew out,” he says. “I was hoping to work with someone from California and was thrilled to get a chairman who was at the center of attention. It was a fascinating experience to see the inner workings of a congressional office and how government functions—or doesn’t.”

When the U.S. Supreme Court ruled on affirmative action and gay marriage, David could understand the court’s arguments and see how they’d be applied. “The critical reasoning Ilearned at Westmont is more valuable in D.C. than spitting out dates and facts,” he says. “I worked autonomously without coaching, unlike other interns. Westmont prepared me far beyond them.”

As Westmont College Student Association (WCSA) president this year, David says he strives to represent the entire student body. “I want to be a good listener and find out what the students really need,” he says. “I hope to give something back and help future classesexperience Westmont to the fullest like I have done.”

David has been rewriting the WCSA constitution in hopes of making student government more efficient, transparent and accountable. “Right now it’s just a motto that WCSA is your voice, but I want to make that a reality,” he says.

“The biggest thing I learned in D.C. is that Republicans and Democrats don’t listen to each other. Washington is such a polarizing environment. It’s amazing how unwilling leaders of both parties are to do something as simple as listen. It took the government shutting down for members of the parties to be in a room together and talk. One of the things we do so well at Westmont is to show grace, something that is nonexistent in our government right now. We should show grace to people who make mistakes and are trying new things.”

David says he is open to the possibility of returning to Washington after he graduates in the spring. “Whether I’m a city councilman, president of the Unites States or a staffer who gets no credit,” he says, “I want to be where God can use me to his fullest, for his plan for our world and for his kingdom.”