A large, enthusiastic crowd in Westmont’s Global Leadership Center welcomed Clayborne Carson, the world-renowned and acclaimed Martin Luther King Jr. scholar and director of the King Papers Project. He spoke about “The Lives and Shared Legacy of Coretta Scott and Martin Luther King Jr.,” as part of a Mosher Center for Moral and Ethical Leadership luncheon November 4. 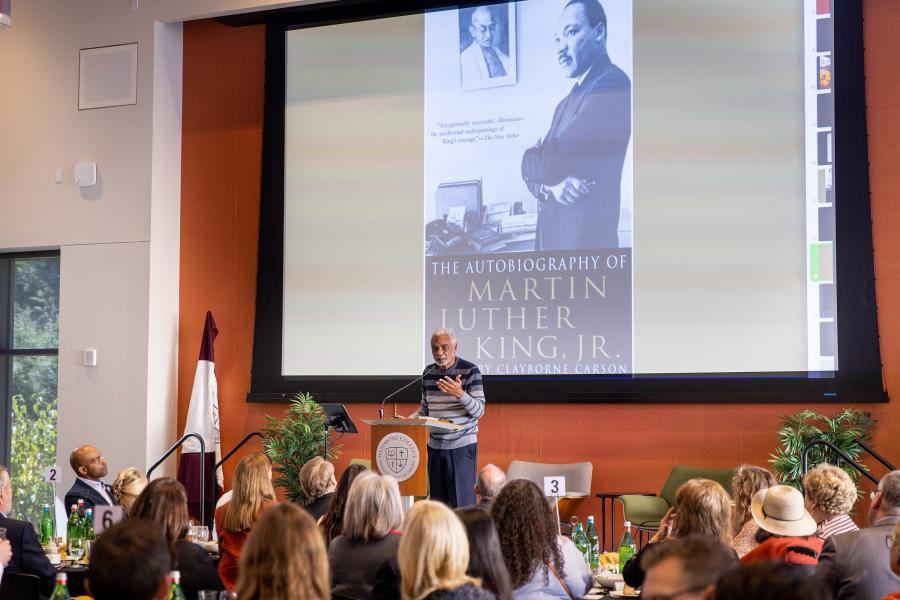 “Dr. Carson has dedicated his life and scholarship to the legacy of Dr. King,” said President Gayle D. Beebe. “Growing up in a Quaker home, he was very much a hero within our family — within our religious tradition. To really be able to go into his life and work in a way that just brings a greater depth of appreciation and clarity has been a great gift. I feel indebted to Dr. Carson for illuminating so much of the legacy of Dr. King and really bringing his writings to life.”

Carson began his talk by sharing an intimate letter written by Coretta in 1952, a year before their marriage, inside a copy of Edward Bellamy’s 1888 book “Looking Backward,” a time-travel novel about the nation becoming a socialist utopia 100 years in the future.

“Believing that Martin's letter was too politically revealing, Coretta shielded from the prying eyes of scholars such as myself for almost a half a century,” Carson says. “Even after she selected me to edit and publish her husband's book, this letter remained in her personal possession. In fact, I heard rumors that there was this box of materials under her bed that she kept very close to her. I considered burglary.”

Her stance to keep the letters private softened after Carson gave Coretta a draft of Martin’s autobiography. “She looked at it and said, ‘Where am I in this?’” Carson recalls. “And I said, ‘Well, Martin had not really written about you very much.’” 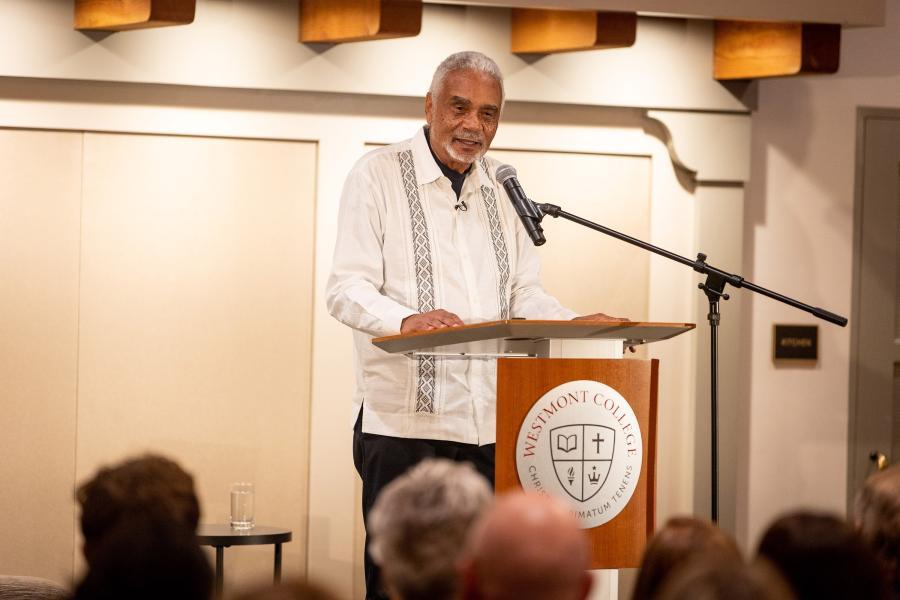 Several weeks later a packet arrived at the offices of the King Papers Project with all the correspondence between the two. They reveal the raw emotion of a young couple in love and Coretta, a highly educated, politically active woman, wanting to maintain her career. “She was involved with civil rights activities, anti-war activities and pacifism,” Carson says. “And she used the words of Horace Mann, who founded her alma mater Antioch College: ‘Be ashamed to die until you have won some victory for humanity.'"

Martin’s emerged as a leading activist by learning from and working with others. “Martin thought about these ideas, but he didn't have any sense of how to accomplish them,” Carson says. “Imagine Coretta, more than two years older than Martin, dealing with a rather young, experienced minister who is idealistic but has no political experience.”

In 1965, Coretta had spoken at an anti-Vietnam War rally in Madison Square Garden. Later, Martin accompanied her to Geneva, where she spoke at a women's conference designed to end nuclear testing. “There a reporter, who recognized Coretta, asked Martin: ‘Did you write her speech?’” Carson says. “She looks back and Martin, who, to his credit, says, ‘No, I think she ought to have written mine.’

“We have to credit her with carrying on his legacy, though they were together for only 15 years. Martin could not have created a birthday for himself. He could not have created the memorial in Washington. So much of what we will celebrate in January is her making. This has become a shared legacy, and we should recognize that.”

This new insight was not lost on attendee Gregory Freeland, California Lutheran University professor of political science. “We need to pay attention to relationships because the men usually get most of the attention while the women may actually play a large role in their lives,” Freeland says. “We think MLK did it all himself, but that was not the case. I hope this new narrative inspires women to not give up.”