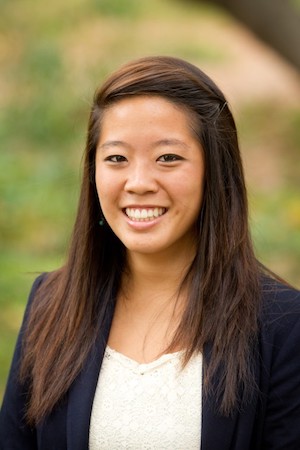 Kristin Lo ’13 applied to Westmont only because her mother encouraged her to take an interest in the college. “It was the one school I didn’t want to attend, and now I’m student body president,” she says. “I laugh about it, but I still can’t believe it. It wasn’t in my plan, but it was in God’s.”

Visiting campus and receiving a scholarship helped change her mind. She ended up choosing Westmont over UC San Diego. “Westmont could provide the intimate classroom environment I wanted,” she says.

Kristin grew up in La Canada, Calif., and attended a culturally diverse high school. She struggled at first at Westmont. “I was my roommate’s first Asian friend here, and it was difficult being the only Asian in my classes,” she says.

During her sophomore and junior years, Kristin was elected to serve as the multicultural representative to the Westmont College Student Association (WCSA), and she voiced the concerns of students of color, international students, missionary and third -culture kids.

“I turned a lot of hurt into a genuine desire to encourage students to be more culturally sensitive,” she says. “I made sure the council’s decisions considered other cultures. I also wanted our events to reach out to all students, not just the intercultural organizations. I tried to convey the message that everyone can learn about different cultures and students of color.”

As WCSA president, Kristin led the council’s efforts to register students to vote for the U.S. presidential election and to hold community meetings. “We addressed topics such as being educated about issues in the election, how the campus can become more environmentally sustainable, and whether to allow for a large-scale, pro-life demonstration on campus,” she says.

WCSA is working on a report that evaluates students’ interpretation of what it means to be globally minded in residence and student life, academics, chapel, leadership and campus-wide activities.

“We will share the global document with administrators and residence life staff and possibly with the new director of global education,” she says. “We hope to share more stories about the international student experience and how Westmont can be a better host to these students.”

Kristin is not only globally minded but well traveled. She has visited family in Hong Kong, backpacked through France, Italy and Spain, ventured into Mexico, Canada and Japan, and sung with the Westmont choir throughout England and Scotland in 2011.

“The choir tour was an opportunity not only to see big cathedrals and churches but to sing inthem and hear the amazing acoustics,” she says. “You don’t normally get to sing in these places as a tourist. The architects created their visions of heaven in these buildings, and singing in them helped me imagine heaven. It was a spiritual, musical and communal experience.”

A communication studies major, Kristin enrolled in the inaugural program of Westmont in Istanbul in 2012. “We studied in Istanbul for three months, spent a month in Israel and Palestine and traveled to Jordan for 10 days, getting to know the people and taking classes from professors in each region,” she says. “I enjoyed being in a completely foreign environment.”

She vividly recalls an interfaith dialogue between the Westmont group and non-Christian graduate students in Istanbul. “It was special interacting with students our age who believed in something else and were curious about our faith,” she says. Several Westmont students made friends with students from the local university and attended a soccer match with the Turkish club soccer team.

“It was eye-opening,” she says. “I’m not a sports person, and I’d never been to a football game, but it was like a religion for the people at the university. If you didn’t know what team you were rooting for, it was a sin. If you weren’t standing, rooting, chanting, singing and waving scarves, you could be thrown out. So we ate sunflower seeds and sang Turkish songs we didn’t even know the words to.

“As Westmont students, we should understand and try to define what it means to be globally-minded citizens whether it’s abroad or on campus in Santa Barbara. It’s one of the five planks of Westmont because the college prepares us to be citizens of the world after we graduate. Cultivating, understanding and seeing our differences and how connected the world is helpsprepare us to be sent out into the world after Westmont.”