Westmont Magazine Four Seniors Set Off Into the World

The Westmont class of 2012 includes many accomplished graduates like Melissa, Coby, Kimberly and Elijah. 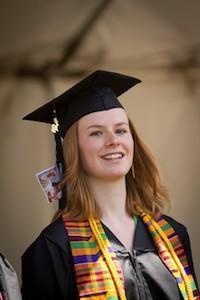 MELISSA CHRISTENSEN ’12 co-directed Emmaus Road this year, encouraging a record 71 students to participate on summer service trips to Bolivia, China, Guatemala, Nepal, Uganda, Spain, Japan, Israel and Indonesia. She earned the Kenneth Monroe Award at Commencement, given to students who demon­strate superior academic achievement, excel as leaders and influence other students with their integrity, character and faithfulness.

Melissa, who grew up in Belgium, traveled much of her life with her American parents and three brothers, starting churches and launching worship ministries in the French-speaking world. Melissa learned about Westmont from her parents, who attended Wheaton, and her godfather, Reuben Sequeira ’92.

“So it was between Wheaton and Westmont,” she says.“I had a great experience visiting Westmont and spending time with professors. The relationships I’ve developed with professors have been an important part of my Westmont education.”

Melissa participated in Nomads, a student group that supports missionary kids and international students. Her sophomore year she became a resident assistant in Armington Hall, and she earned the David K. Winter Servant Leadership Award in 2009. A member of Phi Kappa Phi National Honor Society, she graduated with a degree in religious studies and a 3.94 GPA.While studying with the Mediterranean Semester in 2011, she learned about the complex layers of history and conflict in the Middle East.“It made me think,‘As a Christ follower, do I want to be someone who perpetuates violence or someone who seeks to bring peace and reconciliation?’”

Melissa supported long-term Emmaus Road projects to increase global awareness among students.“That’s what I’m passionate about,” she says.“For Global Focus Week, the theme was conflict and reconciliation, which allowed me to share my knowledge of the Middle East with fellow students. It’s really critical that we expand our perspectives on the world. I’ve seen the value of being exposed to different perspectives, and those experiences have enriched my life, especially as a Christian.”

Melissa, who speaks English, French and Spanish and has studied Dutch and German, does translation and multilingual public relations work in Santa Barbara. She plans to move to China next year to learn Mandarin, which she studied before attending Westmont.“I’d like to use these languages to be a mediator or teach English,” she says.“Mediating and empowering are two ways I can use my gifts. I come alive when I speak Mandarin or another language and act as a bridge between people.” 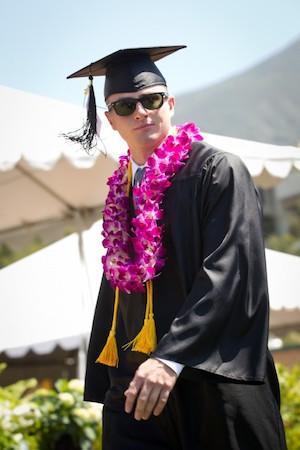 COBY CRESS ’12, the first Westmont baseball player named to the Academic All-America Team, hit .368 in 2012 and led the Warriors to their first postseason appear­ance in 15 years. The Waddell, Ariz., native earned a 3.95 GPA, the Outstanding Senior award in economics and busi­ness, the Golden Eagle Award for his accomplishments as a student and an athlete, and the Dean’s Award, given to the outstanding male and female scholar-athletes at graduation. Cress played baseball for

Arizona State University his freshman year butdecided he wanted a different kind of college experience. He worked out at Azusa Pacific University and met Robert Ruiz, an assistant who soon left APU to become Westmont’s head baseball coach. During the summer, Cress played baseball and served with Athletes in Action, participating in Bible studies, working with youth camps and playing a memorable game against a prison softball team. He set new priorities for his life and reflected on his encounter with Ruiz.“I realized he was a good person, and that’s what was important to me,” Cress says.“It wasn’t about playing division-one ball. It wasn’t about the win-loss record of the school. It was about finding a man of character.” He decided to follow Ruiz to Westmont.

When Cress enrolled, he’d never been to campus. He discovered the baseball field was under renovation and the program had a bad reputation among the students. But he had faith in Ruiz’s plans for the program. “Coby taught me a lot about loyalty,” Ruiz says.“He stood by my side, and we stuck to our vision.”

Ruiz wanted to recruit students like Cress, skilled athletes who wanted to excel academically. After three years under Ruiz’s coaching, the Warriors made the playoffs and earned the second highest GPA of all men’s athletics teams at Westmont. The baseball players also demonstrated school spirit, consistently cheering for the women’s basketball team. Even with their demanding schedule, players served in the community, hosting six separate community outreach clinics, volunteering at Elings Park, planting trees at Dos Pueblos High School and teaming up with developmentally challenged baseball players in Ventura. 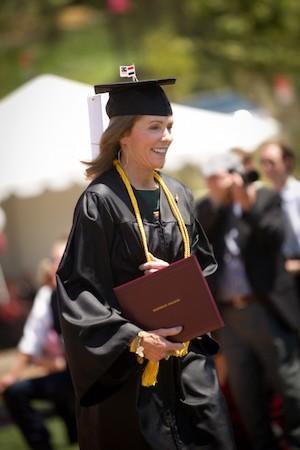 “Even though I probably put in twice as much time on my schoolwork than everyone else, I always prayed, ‘Oh Lord Jesus, please, I can’t have a senior moment in this mid-term or final,’” she says. “You know, where suddenly you think,‘Wait, what was I just talking about?’ I can’t have that happen in the classroom. And God was faith­ful. I knew the other students in my courses weren’t praying they wouldn’t have a senior moment!”

The stay-at-home mother of five children attended Santa Barbara City College with her second youngest son, Anthony, who graduated from UC Santa Barbara a month after she earned her degree.

“I love learning,” she says.“Even though I wasn’t in college, I was always reading non-fiction and learning. I also realized that everyone else has an education, which inspired me because I am extremely competitive.”

Kimberly is the oldest of five children and spent many days beating her four brothers on the basketball court or playing flag football.

“I knew that I couldn’t compete physically with these students, but I could compete in the classroom and be at the top,” she says.“It’s my competitive nature. When you do something, whether starting a nonprofit or teaching children at church, you do your best. I’m driven that way.

“I remember reading Eleanor Roosevelt, who said do something out of your comfort zone everyday, something that scares you. I came to Westmont knowing the students here are very bright. That was out of my comfort zone.”

Kimberly, who had run marathons in the past, joined the Warrior cross country team and also threw the javelin for the track and field team.

“It was a lot of fun and one of my many highlights at Westmont,” she says.“At the cross country meets, my goal was to never come in last place. I’d like to continue doing the javelin now that I’ve recovered from a nagging Achilles injury. I didn’t perform as well as I would have liked and want to compete in master’s events for the old fogies.”

Kimberly graduated with a degree in history and belonged to the Phi Kappa Phi and Phi Alpha Theta National Honor Societies.“Every time I went to class I felt a little nervous because I wanted to feel accepted,” she says.“But the students were always accepting. They never made me feel like a freak. They just treated me like their other friends.”

Students soon realized she wasn’t there to mother, judge or hover over them.“They began to open up and allowed me to be more of a mentor. I enjoyed being able to have a small voice in their lives,” she says.

Going to college improved her marriage, which surprised Kimberly. She grew up in a traditional home where her mother managed the household, doing the laundry, cooking and cleaning, and she followed this example.

“When I went to school, I couldn’t do all my volunteer work, be a student and do track,” she says.“So my husband, John, had to do a lot of changing, and he was incredibly supportive. It enriched and enhanced our marriage. He encouraged me and proofread my papers. He was my best fan—and he learned how to run the washing machine and go to the grocery store. It was outstanding.” 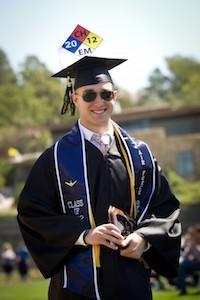 ELIJAH TYLSKI ’12 earned the 2012 Faculty Scholarship Award for the highest cumula­tive GPA (3.98) during four years at Westmont and begins pilot training for the U.S. Air Force in February. The Kansas City native initially ruled out Westmont because of the cost but came to campus to com­pete for a full-tuition Monroe Scholarship. He didn’t get it but decided to enroll anyway. “Seeing the campus and meet­ing the people sold me,” he says.“Westmont was the best college I visited.”

After careful consideration, Elijah enrolled in an Air Force ROTC program to help pay for tuition. He had expected to follow a pre-med track, but he enjoyed the people in ROTC and began to envision a military career. After laser surgery corrected his eyesight, he pursued a pilot slot.

Elijah continued his chemistry major after the shift in vocational interest.“I was learning out of curiosity and interest in the subject, which made it very rewarding,” he says.

His major honors project,“Wittig olefination and stereoselective conjugate addition from chiral oxazolidinones,” culminated two years of research with David Marten, professor of chemistry. Elijah also co­authored “Evaporation rates of alkanes and alcohols on a glass surface as observed by optical interference” for the journal Chemical Educator.

“I enjoyed figuring out how to use lab equipment, solve problems and think creatively to further our research,” he says.“I appreciated having one-on-one time with every professor in the department. I definitely learned more about chemistry by being involved in hands-on research.”

Every Friday, Elijah drove to Loyola Marymount University in Los Angeles for all-day ROTC training courses.“I learned good time-management skills, which was critical because I missed a third of all my Monday, Wednesday and Friday classes at Westmont,” he says.“I had to keep two steps ahead of my work so I didn’t lose ground, especially in organic chemistry, physics, calculus and biology.”

Elijah earned a scholarship from the Daedalians, a local military pilot’s organization, and took flight lessons, soloing and logging 12 hours of flying. The experience helped him land a spot with the prestigious Euro-NATO Joint Jet Pilot Training program at Sheppard Air Force Base.

“My goal is to fly a fighter aircraft,” he says.“People from ENJJPT can get any airframe, but I’ll have a better chance of getting a fighter or bomber there. I had never envisioned myself as a pilot. I was in the right place at the right time and saw it was something I wanted to do.”

While at Westmont, Elijah participated in Spring Break in City, assisting ministry projects and working with the homeless in Los Angeles. He also got involved in Capax Dei, a weekly prayer group on campus. “My Westmont education has definitely caused me to think critically about ideas and opinions and to have a broader Christian worldview as I engage the world around me,” he says. Before he begins pilot training at Sheppard, Elijah will work at Lawrence Livermore National Lab, where he earned a chemistry internship.

He was commissioned as a second lieutenant in the Air Force in June. “The military needs responsible Christians influencing what’s going on, and I feel Westmont has prepared me to take on this responsibility and challenge,” he says.