A Monroe Scholar studies music, philosophy and his heritage as a Chinese American. 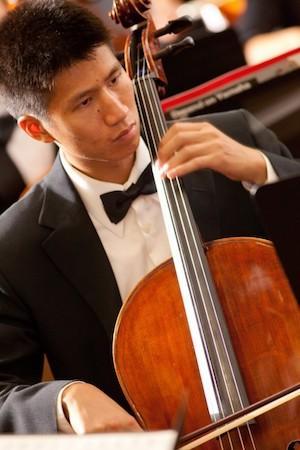 Daniel Gee ’13, who received a prestigious Monroe Scholarship to attend Westmont, has sought to make the most of his college experience. Majoring in both music and philosophy, he performs with the Westmont Orchestra, works on research with a philosophy professor, and spent a semester studying abroad.

Daniel applied to Westmont after his sister, Jayne ’08, shared how much she had grown and enjoyed the academic atmosphere in a Christian setting. Recognizing his excellent grades and test scores, the college invited Daniel to the Monroe Scholars Weekend for 30 candidates for the full-tuition scholarship. Westmont awards only foureach year.

“The weekend was determinative for me,” Daniel says.“I remember thinking how great it would be if these are the type of students and faculty I’d be interacting with and growing with. I expected everyone to be intelligent and driven—maybe I even expected a cut-throat, competitive atmosphere, but everyone was cordial, kind and real, talking about how nervous they were. It was an intelligent, thoughtful dialogue done in a compassionate way.”

Daniel began playing the cello in fourth grade and started composing and arranging pieces in eighth grade. He recalls his family enjoying and playing worship songs together at home in Temple City, Calif.

“During these family gatherings we all played music, basic but fun songs in a nurturing and safe place,” he says.

He has also played guitar to lead services at his church back home, and he has performed both electric bass and cello in chapel with the Westmont Worship Team for the past three years.

“God has provided mentors, environments, circumstances and opportunities for me to be able to explore, glean from others and serve others through music,” he says. “That’s made music a joy and not drudgery, as it can be for some people.”

Last spring, Daniel traveled abroad with the Council for Christian Colleges and Universities’ Best Semester China Studies Program, which is based in Xiamen, a city in Fujian Province in southern China near Taiwan.

He chose the cultural studies track, studying Chinese language, culture, history and philosophy. At the end of the semester, he stayed in China, traveling with a friend until the Westmont Orchestra arrived for their 10-day tour in May.

“It was overwhelming but joyous,” he says of the orchestra’s arrival in Beijing.“It was great to see my friends and to be able to show them the culture and country I had been learning about, which was my own in a way.

“It was a joy to be able to play in different venues for the Chinese people, especially the “Hallelujah Chorus” from Handel’s “Messiah” with the choir from Shanghai University. I really enjoyed making Chinese friends, both Christian and non-Christian, and being able to engage with the registered and unregistered church in China.”

Daniel presented a summer research project in 2011 with David Vander Laan, associate professor of philosophy, that focused on mereology, the philosophical study of parts and wholes. He examined various contemporary accounts of the conditions for mereologicalcomposition, the conditions in which given objects make up a whole.

After he graduates this spring, Daniel will apply for graduate school to study music composition or conducting. He hopes to pursue a career as a music professor.

“I love people and want to invest in them,” he says.“The faculty at Westmont have done that for me, both professionally and personally, mentoring me and offering advice in music and other matters of life as a Christian living in this world.Also, I love music and want to pursue it as long as I can. I’ve seen the challenge but also the joy and excitement of trying to engage in a topic as far as I can.

“There’s a sort of joy in being able to communicate with precision, contribute and bring depth to a certain field,” he says. “The tradition of music, not just in the West, but around the world, is incredibly rich, including how it relates to the church and how God has created the world and wants us to experience it. And so, if God has given me this opportunity and this passion to engage the world in this way, then I am excited to take him up on it.”