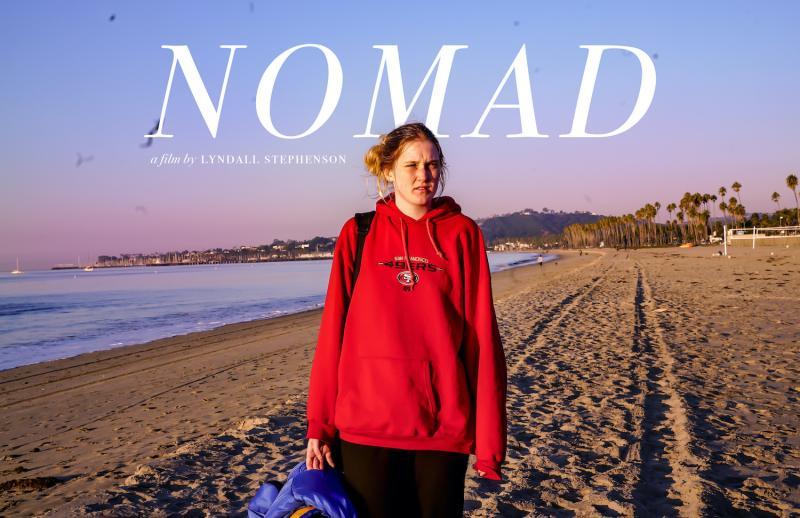 “Nomad,” which Lyndall wrote and directed, follows the story of a young homeless woman in Santa Barbara befriended by an older woman who is also homeless. By using two women of varying ages, Lyndall contrasts how homelessness affects women at different stages in their lives.

“I wrote it to capture a bit of what it means to be a woman on the street in North America,” she says. “I wanted it to reflect what I love and find powerful about the medium, that it can give a voice to the voiceless and depict someone you might never interact with otherwise. I wanted my film to be a social commentary with the backdrop being Santa Barbara, where one of the biggest social issues is homelessness.”

Lyndall came to Westmont from Cambridge, England, and cast her mother, Jean, in the role of Mags after several fortuitous events. In the fall, Lyndall studied at the Los Angeles Film Studies Center (LAFSC), a program through the Council for Christian Colleges & Universities’ Best Semester. With her father arriving in San Francisco for a conference in October, her mother made plans to visit her in LA the week she planned to do an open casting call. “I didn’t think it would work out to see my mom,” she says. “Then suddenly it dawned on me my mom could play the role of Mags.”

An author of three children’s books, Jean grew up in the theater, performing throughout high school and college, before pursuing acting in LA and returning to the theater in Chicago. “It was honestly the best-case scenario because I could FaceTime with her and do a lot of character work before production,” Lyndall says. “It was a blast having my mom be a part of the process.”

While waiting to premiere her film, Lyndall has moved to LA to pursue a career in acting. “My dreams are to act and to help create films sharing the stories of marginalized and oppressed people,” she says.

Lyndall has been deeply involved acting and writing in Westmont’s Fringe Festivals and Spring Sings. Other film projects include a TV pilot she edited while studying at LAFSC. She also wrote and acted in a Spring Sing side-act video this year that starred Campus Pastor Scott Lisea as the Godfather.

During her first semester at Westmont, Lyndall recognized her passion for film. “I began to pray about whether God wanted me to pursue it, and I felt He released me to do it,” she says. “In the past four years, I’ve felt more and more of a calling to film.”

Lyndall wanted to study at a Christian college in California to escape cold, rainy and mostly secular England. She came to Westmont to visit her brother, Ian ’18, when he was a freshman.

“I stayed in Page for one night with some of his friends, and they were some of the coolest girls I had ever met—and I still know them today,” she says. “We had such awesome and deep conversations about faith and friendships, and I remember thinking, if these are the kind of people who go to Westmont, I want to be there.”

Lyndall says all facets of her time at Westmont have shaped her. “My religious studies classes made a big impact on my life,” she says. “Old Testament with Dr. (Sandra) Richter and New Testament with Dr. (Holly) Beers hugely influenced me, not only in the way I view the Bible and my faith, but also my thought process and how I deal with other perspectives.”