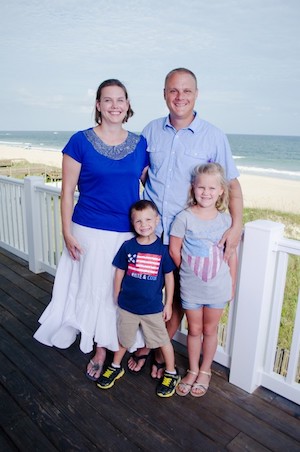 Watching weather radar from afar, Paul Schlatter ’99 realized Moore, Okla., faced a devastating tornado last May. A severe weather expert with the National Weather Service (NWS), he lived near Moore for 12 years and witnessed the damage a weaker storm wreaked on his home. Two hours after the EF-5 tornado ripped up the city, he began talking to the media from his Washington, D.C., office. He appeared on six different national media outlets discussing tornado forecasting, the historical context of the Moore storm, and new technology for detecting tornadoes and disseminating warnings.

The son of a meteorologist with the National Oceanic and Atmospheric Administration (NOAA), Paul grew up in Colorado amidst tornados, hail, lightning and heavy snow. “Weather has always fascinated me,” he says. “I knew by the age of 8 I wanted to be a meteorologist.” He looked at two schools: Westmont, which has no meteorology program, and the University of North Carolina at Ashville, which does. He chose Westmont to focus on his faith, majoring in engineering physics to get a foundation in math and physics.

“Westmont played a critical role in my career by helping me develop character traits Christ intends for us, such as respect, humility and compassion,” he says. “But I didn’t experience much weather there, just two thunderstorms and a low of 31°.” His wife, Katie Heuschkel Schlatter ’99, also majored in engineering physics and works as an industrial engineer for the National Institute of Standards and Technology. They have two young children.

Earning a Master of Science in meteorology at the University of Oklahoma, Paul studied severe weather analysis and forecasting, specializing in a new type of weather radar: dual-polarization (dual-pol). He then trained forecasters at the NWS Warning Decision Training Branch in Norman, Okla. When the NWS decided to convert their 160 weather radars to dual-pol in 2010, he developed tools to best visualize the new data and methodologies for using it to detect severe weather. With his expertise, he served as the project manager for training more than 2,000 NWS forecasters in dual-pol technology. By the time the upgrade concluded in June 2013, Paul had explained the new system to the media countless times, earning the nickname “Dual-Paul.” The new system displays two dimensions of data so forecasters can differentiate between types of precipitation and provide more precise information to the public.

In 2011, Paul accepted a two-year assignment in NOAA’s Program Coordination Office in Washington, D.C. He began by advising the NWS director, preparing remarks, presentations and briefings about severe weather and radar and suggesting strategy. During the second year, he served as the NWS liaison to NOAA, developing similar communications and providing critical information and advice during major storms. “I helped shape policy and high-level decisions for the only agency I ever wanted to work for,” he says. “It was a unique leadership opportunity.” Now assigned to the NWS Office of Science and Technology, he assists the director oversee various technical projects. In the future, he hopes to return to a policy-related position.

Meanwhile, Paul continues watching violent storms on radar, which he now prefers to chasing tornados on the ground. “I always knew I wanted to make a difference,” he says. I’m passionate about providing important weather information that can save people’s lives.”